Statement: Each sculpture has its own memory. A torus is separated by three twisted surfaces, resulting in a single band. It looks like three parts. It seems to be a reincarnation of the past, present and future.

Biography: Ushio has exhibited to international acclaim with his work represented in exhibitions, public locations and private collections in Japan, Spain, Iceland, Norway, Germany, Israel, India, Australia, New Zealand and the USA. Ushio’s work has proved extremely popular with Australian collectors and the public alike since he began exhibiting in Australia at Sculpture by the Sea in 1999. Keizo Ushio is one of Japan’s most highly regarded sculptors and is renowned internationally for his extraordinary granite sculptures. He graduated from the Kyoto City of University of Arts in 1976 and, upon receiving First Prize at the Henry Moore Exhibition at the Hakone Open Air Museum in 1979, began developing his signature style of sculpting. His carving technique is influenced by the mathematics of the Moebius strip, typically known as a one-sided, one-edged surface, which is notoriously difficult to create with materials of great weight and density. 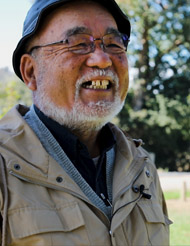 This Bushfire Local Economic Recovery Program is jointly funded by the Commonwealth and the New South Wales Government under the Disaster Recovery Funding Arrangements.