DANISH ARTIST RECEIVES NEW AWARD TO EXHIBIT AT SCULPTURE BY THE SEA, BONDI 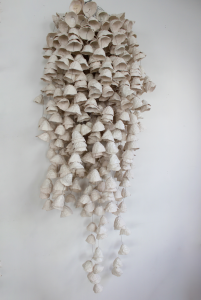 This new artist award supports Danish artists to exhibit at Sculpture by the Sea, Bondi and aims to further Danish-Australian cultural ties.

Utzon Popov’s artwork entitled ‘Continuum 2021’ will be exhibited hanging down one of the sandstone cliffs of Bondi in this year’s exhibition set to run from 21 October – 7 November. This will be the 50th Sculpture by the Sea exhibition held in Denmark and Australia*, with the City of Aarhus hosting four editions of the exhibition.

Thanks to the Friendship Society of Denmark, Australia and New Zealand (‘the Friendship Society’) and the Australian private donors to Sculpture by the Sea, Utzon Popov is the first of ten Danish sculptors to receive the Danish Artist Award, which will continue with a new artist selected annually for the next decade. In receiving the award, Utzon Popov, as the granddaughter of Jørn Utzon, continues her family’s strong cultural links with Australia.

David Handley, Founding Director of Sculpture by the Sea, said, “Just as the people of Denmark enjoyed artists from around the world exhibiting in Sculpture by the Sea, Aarhus, the people of Australia have greatly enjoyed the artworks by Danish artists in our exhibitions on both sides of Australia, on the Bondi coastal walk in Sydney and Cottesloe beach in Perth. This award continues the special Denmark-Australia-Sculpture by the Sea relationship, offering international exhibition opportunities for ten Danish artists over ten years. As the granddaughter of Jørn Utzon, there is something doubly special about Naja receiving the inaugural award as we move towards the 50th-anniversary celebrations of the Sydney Opera House in 2023.

“I would particularly like to thank Hanne Bache and her colleagues at the Friendship Society of Denmark, Australia and New Zealand for their longstanding support of the artists in Sculpture by the Sea which began with the wonderful Aarhus exhibition 12 years ago. This award will see this support for artists stretch ahead for another decade.”

Hanne Bache, President of the Friendship Society of Denmark, Australia and New Zealand, said: “As the President of the Friendship Society of Denmark, Australia and New Zealand I am grateful that Founding Director David Handley has made it possible for us to be part of a fascinating cultural project in Australia, including an annual artist award. The society was founded in 1969 in Holstebro, Denmark in order to strengthen the bonds of friendship between the countries. Among other things, we have offered advice and guidance to members travelling to Australia and New Zealand, given grants to students and researchers, sponsored an educational programme at the Sydney Opera House and various Australian cultural events in Denmark. Our most significant sponsorship was in connection with Sculpture by the Sea, Aarhus, initiated by The Crown Prince Couple in 2009 and enthusiastically embraced by hundreds of thousands of visitors. In 2021 we decided to donate a substantial part of our capital to a project strengthening the cultural exchange between the friendship countries. The Danish Artist Award is an important part of that project and we are both excited and very proud to have Naja Utzon Popov as the first recipient of the artist award. We extend our warmest congratulations to her.”

Naja Utzon Popov said: “I have followed Sculpture by the Sea for years and always greatly admired the work of previously-selected artists and the level of work. To not only have my work selected to participate but also be awarded the Danish Artist Award is really a huge honour. I am very thankful to the organisers and to the Friendship Society of Denmark, Australia and New Zealand for selecting my work, and also making the whole process of participating from such a distance much easier.” She continued, “It’s very exciting to have my work shown in Australia for the first time and I know the work will be in good company with all the other artists selected.”

In addition to the provision of this significant new artist award, the Friendship Society has made an additional cultural gift to Australia which will be announced in the coming months.