John McDonald writes about the impact of contemporary sculpture within the Chinese culture to society in recent years.

Today’s Chinese sculpture displays all the qualities that have made China into the contemporary art capital of the world – originality, energy and ambition. Many artists acquired an impressive range of skills from an education based on a rigorous Soviet model, but have put those skills to work in ways never previously envisaged.

The boom in sculpture has been fuelled by the widespread embrace of new technologies that are prohibitively expensive for most artists in Australia, Europe and the United States. Industrial procedures such as laser cutting and large-scale fibreglass moulding have become standard techniques for art-making. The most prominent sculptors such as Chen Wenling and Gao Xiaowu, have studios that resemble factories, where numerous assistants are employed.

In recent years I’ve taken many people to Chen Wenling’s studio, and witnessed their expressions of amazement. It is not simply the scale of Chen Wenling’s work that makes such an impression; it is the variety of his themes, the irreverent and grotesque nature of his satirical impulse. Even his trademark red boys may be related to the frantic progress of contemporary China. These naked boys, with their languid smiles, are studies in sensual pleasure. Their leisurely attitudes throw the perpetual motion of Chinese society into sharp relief.

Among Chinese sculptors, Sui Jianguo has a special eminence, having been a respected teacher at Beijing’s Central Academy of Fine Arts at a time of radical change. He describes himself as a “hothead” in his early years, who gradually sought a way of making sculpture that would enable him to “develop a more solid and down-to-earth style and eliminate personal sentiment.” (1)

This led to abstract works such as Earthly Force (1990-92), a series of twenty large stones, each with an iron cage embedded in its surface. He was influenced at this time by concepts drawn from Zen Buddhism and Taoism. Having realised this monumental piece he turned towards more figurative, satirical content, in his sculptures of dinosaurs in cages and empty, freestanding Mao jackets. In Dream Stone, Sui Jianguo’s most recent contribution to Sculpture by the Sea, he has returned to a more abstract approach, using stainless steel to create a mountainous form divided into many small facets.

As sculpture in China remains overwhelmingly figurative, Sui Jianguo is a notable individualist. Wang Shugang, meeting 1, Sculpture by the Sea, Cottesloe 2012. Photo Clyde Yee. The work of Wang Shugang is closer to the mainstream, using life-sized figures to explore social and psychological states. His work, Meeting 1, takes an everyday gathering and turns it into a permanent, public event. The subject of this meeting is a matter of speculation for every viewer.

This ambiguous scenario, immortalised by Wang Shugang, is typical of the teasing, double-edged nature of so much contemporary Chinese sculpture. There may be political or humorous messages to be gleaned from such works, but they can also be viewed as generalised portraits of the human condition. This is undoubtedly a legacy of the monumental sculpture of the Maoist era, which was devoted to the single aim of glorifying the Great Helmsman and his policies. With Chinese sculpture today nothing is ever one dimensional, and – although the artists may not be willing to make this point – nothing is ever quite what it seems. 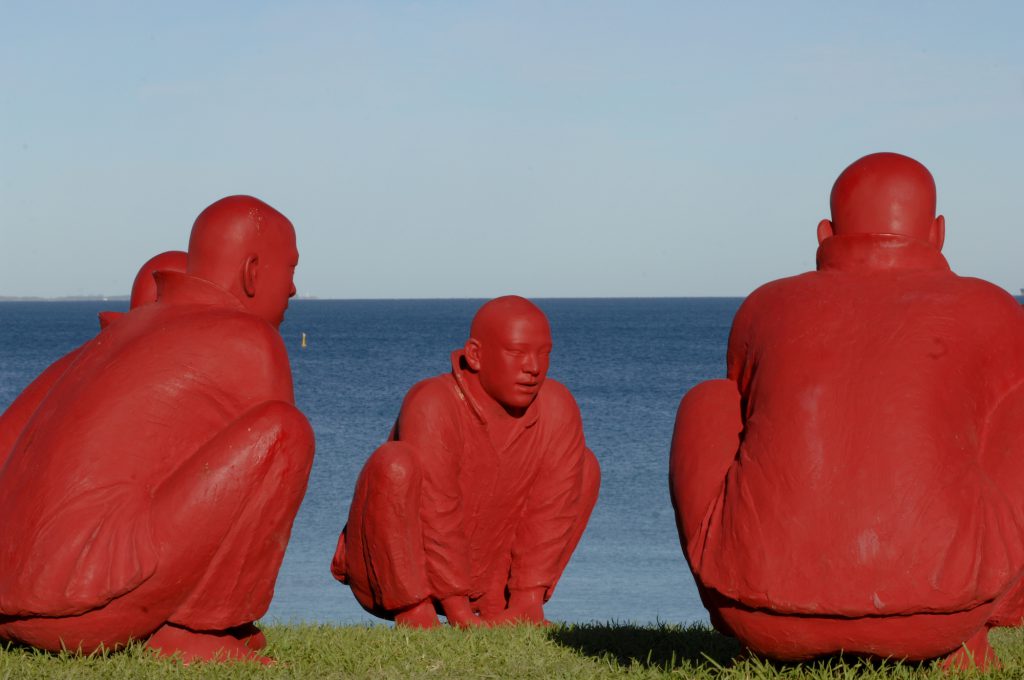