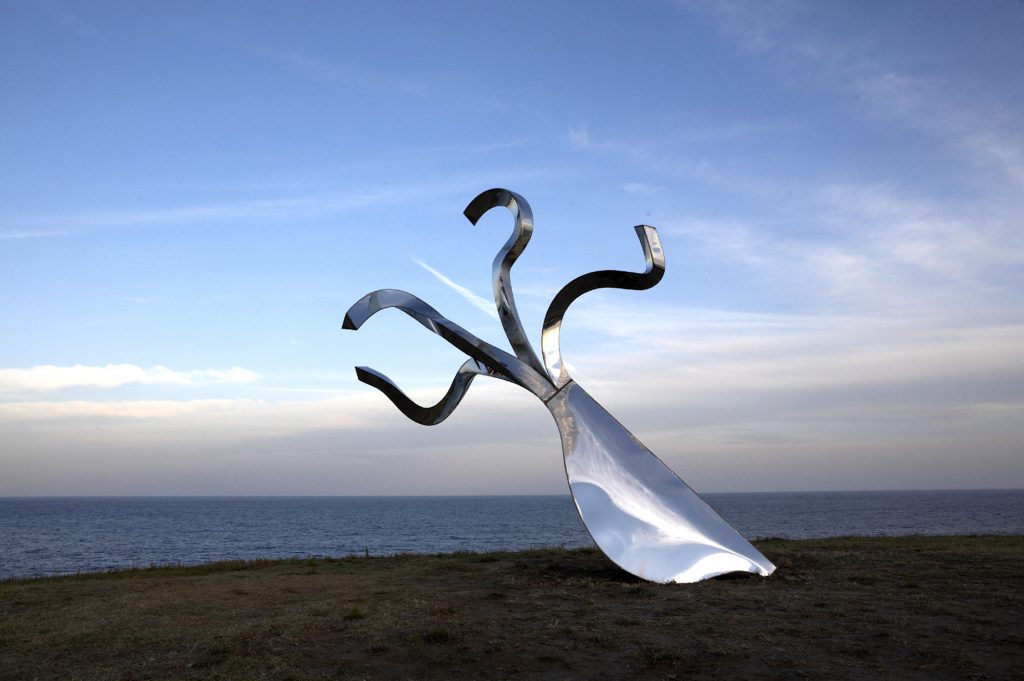 ‘I find it unrewarding to be consistent. The world is full of interesting, funny, excruciating things. My attention wanders. My appetites change.’ Bert Flugelman, 1967

At first glance, the six-decade sculptural career of Bert Flugelman seems to have  been adventurous, restless and diverse. Since the mid-1950s, Flugelman was always sharply aware of the evolving preoccupations and “styles” in international sculptural practice, including expressionism, formalism, land art, site-specific art, conceptual art, performance art, modular art, funk, and assemblage. His own work, at one time or another, embraced and adapted something of all of those tendencies. Any serious account of any of these “movements” in Australian art would have to give respectful attention to Bert Flugelman’s intelligent contribution.

However Flugelman’s primary importance lies in his masterly and inventive use of stainless steel. It was a medium he found to be very suitable for working in a manner that was crisp, calculated, and geometric. Its durability and permanence was also appropriate for large sculptures positioned in open, public spaces. Using stainless steel, Bert Flugelman probably completed more major sculptural commissions for public sites in Australia than any modernist artist of his generation.

The critical point in Flugelman’s career came in 1968, when he visited The Field, an exhibition curated by the National Gallery of Victoria. The Field surveyed the recently emerged Australian formal colour abstractionists.

The work in this exhibition was abstract, technically immaculate, usually severely geometric, and often modular. It rejected figuration and expressionism. Much of the work dealt in abstract terms with issues like ambiguity, paradox, and optical effect. That is, The Field represented an aesthetic that was diametrically opposed to the figurative expressionism that had shaped much of Flugelman’s work thus far.

Flugelman promptly decided to explore sculptural form that was precise and minimalist, and that dealt with irreducible, Platonic solids. To begin with, he used polished aluminium sheets as a medium, but he soon adopted stainless steel. It was highly durable, it would not tarnish, and – most importantly – it retained its reflective properties.

His sculptures’ mirroring-surfaces reflected the changing moods of the sky, the blurred shimmering of nearby wind-ruffled foliage, and the movements and colour of passing people. So although the works were rooted in geometry, they also explored new ground regarding the relationship between a sculpture and its physical and social environment.

In late 1972, Bert Flugelman moved from Sydney to Adelaide to lecture at the South Australian School of Art. Within a year, he had been commissioned to construct a monumentally-proportioned Festival Sculpture – a sequence of double-tetrahedrons that hover and tilt with drama and energy.

Numerous commissions followed, including Spheres 1977 in Rundle Mall, which captured enthrallingly distorted reflections of wandering pedestrians, and Cones 1976-1982, a sprawling articulation of seven double-cone units at the National Gallery of Australia. His Dobell Memorial 1997 was originally installed in Martin Place but is now relocated to (an arguably more suitable location in) Pitt Street, Sydney. This towering column of repeating double-pyramids becomes a luminal kinetic as dusk falls and the sculpture reflects the changing light patterns from adjacent buildings and the sweeping lights of passing vehicles.

In 2007, he exhibited Tetrapus 2005, one of his masterpieces, in Sculpture by the Sea. It was positioned in Marks Park at Mackenzies Point, surrounded on three sides by water – from which one could imagine the sculpture has just emerged. For all its elegant rhythms, its angled trunk and tentacle-like limbs appear ominous and sinister.

In the last years of his life, with the assistance of jeweller Ian Frew, Flugelman completed a body of small sculptures. Less than a metre high, they were fastidiously crafted from copper, and most were exquisitely patinated. While some were abstract in form, others were based on the geometries to be found in the fossils of ancient predatory sea creatures, like ammonites. It had always been important for Flugelman that his sculptures remained open to layers of interpretation, and invited speculation. Flugelman saw these late works as maquettes, capable of being scaled up to occupy a large public space.

Over the last forty years, Bert Flugelman has been one of the comparatively few Australian sculptors to have successfully brought contemporary or radical sensibilities to the tradition of art for public spaces.