The new Indiana Tea Rooms of the 1990’s now recognised as ‘Indiana’. Cover photograph from the recent publication ‘Cottesloe – A Town of Distinction’ by Ruth Marchant James. Photograph courtesy of Stylus Design.

Author of Cottesloe: A Town of Distinction

From the turn of the century until the late 1920s a cluster of temporary beachside stalls and bathing structures were a prominent part of the Cottesloe beach scene. In 1905 and 1907 the construction of two seaside hotels and, in 1908, the completion of a promenade pier, as well as tearooms, shade sheds, and private and public bathing boxes, gradually raised the profile of Cottesloe as a popular beach resort. Band concerts played on weekends and public holidays from a stage erected on the foreshore and for some years Page’s English-style bathing machines operated close to the water’s edge. Well-known tearooms included the Ozone and Surf and, below Forrest Street, Miss Donovan’s Indiana Tea House overlooking the Indian Ocean and jetty.

The Indiana Tea House erected by Miss Donovan c 1910-1914 was easily identified by lettering prominently displayed across the iron roof. The partially latticed building stood on the north side of an access path leading to the jetty. Dancing was high on the list of Perth’s social priorities and in April 1914, Mrs Lowick, who occupied tearooms on the opposite side of the path, successfully applied for permission to hold dances. Two months later Miss Donovan was also issued with a similar permit and in addition to surf carnivals and various forms of entertainment these events attracted huge crowds to the Cottesloe beachfront.

In keeping with the times, the Indiana Tea House changed its name in January 1928 when the new owner, Miss Louise Hamersley, established the Kit Kat Cabaret. Dancing to the music of Billy Naughton’s Kit Kat Band clients enjoyed extended hours from 9pm, until 3am, and to celebrate the State’s Centenary the management advertised the Kit Kat Theatrical Cabaret on Easter Monday 1929. Although often used by local clubs as a social venue, residents and beach-goers did not adapt easily to the premise’s new name and continued to use the Indiana title.

The demise in 1933 of the Kit Kat Cabaret (formerly the Indiana Tea House) was mainly the result of costly maintenance due to storm damage and the success of an impressive bathing pavilion built next door in 1929. The new Centenary three-level building, which contained an observation tower, change rooms, kiosks, restaurants and, at one stage, hot sea baths and a roof-top tea garden, proved extremely popular. From November 1932 a roof-top, open-air dancehall – the Palais de Danse, which opened in an area formerly occupied by the teagarden, drew large crowds and added further weight to the cabaret’s financial problems.

The crippling worldwide depression and mounting overdue rent finally saw the removal of the former Indiana Tea House and its sale to the State Gardens Board in 1933. In future years changes to the seafront included the 1929 bathing pavilion being replaced in 1983 by a less pretentious building, which in turn was demolished when concrete cancer became evident. In 1994 plans were put forward by Greenport Nominees Pty Ltd for a striking new building to be constructed on the same site as the earlier pavilions. Named for the original tearooms that once stood on the adjacent block, the present Indiana gracing the foreshore is today an internationally recognised landmark. 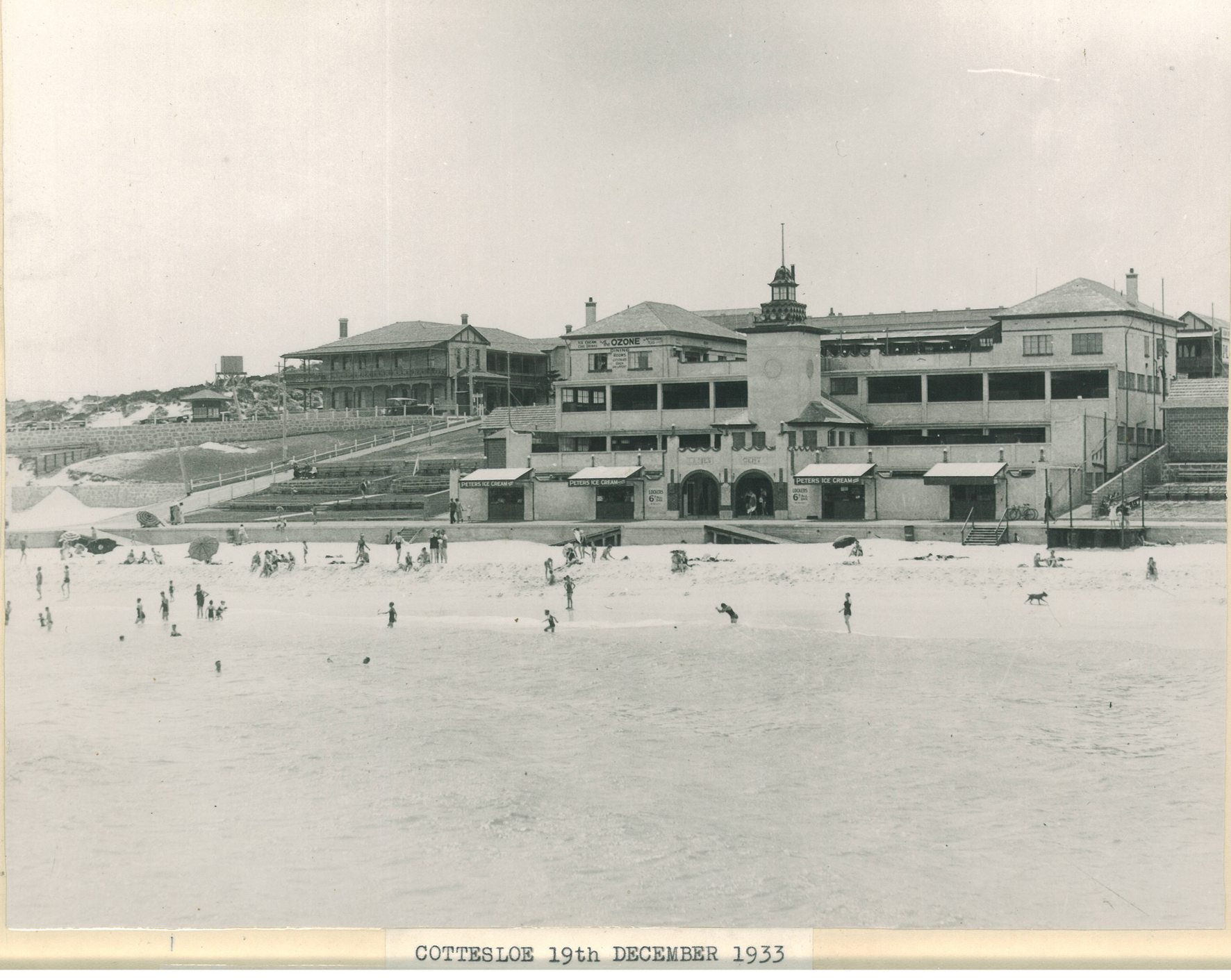 1929 Bathing Pavilion. Photo courtesy of the Town of Cottesloe