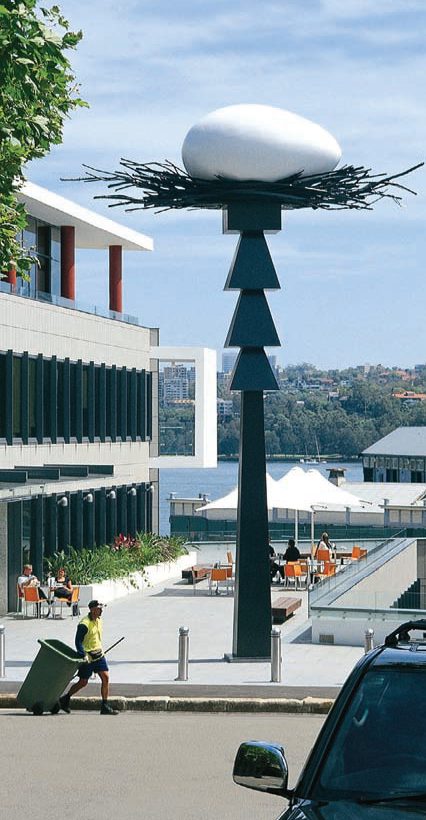 In 1985 the historic Piers and Shore Buildings at Walsh Bay were saved from demolition by the Premier and Minister for the Arts, Neville Wran. He reserved Pier 4/5 for the arts and particularly the Sydney Theatre Company.

Over the following twenty years Piers 4/5 and 2/3, together with the Shore Sheds, have become home to several arts organisations and have hosted the Biennale of Sydney and The Sydney Writers’ Festival.

In 2004 Bob Carr, Premier and Minister for the Arts, presided over completion of the $650 million Walsh Bay Redevelopment Project, which was undertaken by Transﬁeld and Mirvac.

The erection of Black Totem II sowed the seed for an outdoor art exhibition and in 2008 Transﬁ eld launched the Walsh Bay Sculpture Walk. ‘The Walk’ is a permanent public display consisting of works from The Transﬁ eld Art Collection and loans from artists and private patrons. 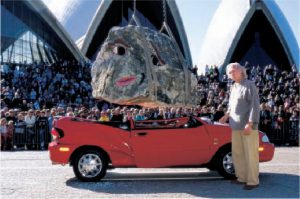 Jimmie Durham with ‘Still Life With Stone and Car’, Biennale of Sydney, 2004

The Walsh Bay Sculpture Walk also features Still Life With Stone and Car by American artist Jimmie Durham; a work which has also quickly established itself as a local landmark. Conceived as a piece of kinetic performance, the initial crushing of ‘The Car’ was staged on the Sydney Opera House forecourt as part of the 2004 Biennale of Sydney. Still Life With Stone and Car now sits on the Pottinger Street roundabout drawing attention from bemused tourists and distracted motorists. It is identiﬁed by two sublimely subliminal road sign representations by Richard Tipping.

The works installed this year complete the ﬁrst phase of the Walsh Bay Sculpture Walk.

‘Still Life With Stone and Car’ at Walsh Bay