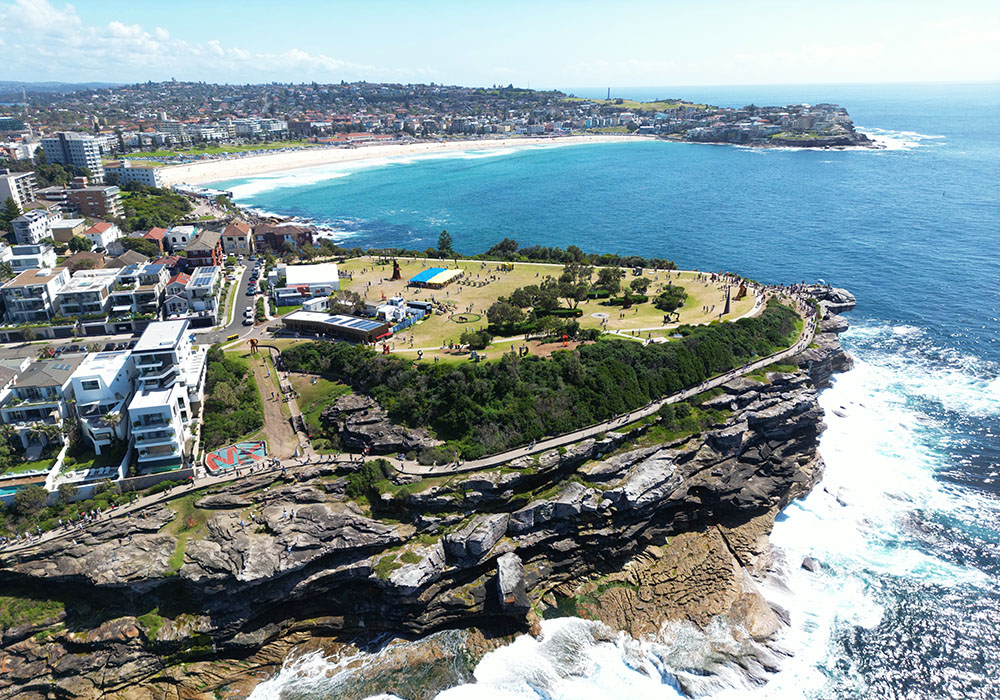 The Ukrainian community and supporters came together at Sculpture by the Sea, Bondi early on the morning of Saturday 5 November to unfurl a 18m x 12m Ukrainian flag in a gesture of international friendship for the people of Ukraine and to raise funds for the Ukraine Crisis Appeal.

The exhibition, which opened to the public on Friday 21 October, includes a Ukraine Showcase as one of the highlights with artworks by Dmitriy Grek, Egor Zigura, Nikita Zigura and Oleksii Zolotar, curated by Viktoria Kulikova, Art Director at Abramovych Art Agency from Kyiv. The not-for-profit organisation which runs the exhibition is donating its commission on the sale of the Ukrainian sculptures to the Ukraine Crisis Appeal with the artists also donating 10% of their sale proceeds.

Dan Wolody, President of the Ukrainian Council of NSW, said: “The decision of Sculpture by the Sea to support the Ukraine Crisis Appeal this year is not only a great financial and morale boost for the people of Ukraine, it also sends a strong message of solidarity between Australian and Ukrainian communities. Events like this bring the war to ‘front of mind’, which is where we need to keep it if we are to win the war for Ukraine’s freedom. We’re hoping to raise $100,000 to the Ukraine Crisis Appeal if all of the Ukrainian artworks are sold, which will provide much-needed support to all the refugees returning to their bombed-out homes.”

David Handley, Founding Director of Sculpture by the Sea, said “It was wonderful to see a large number of Australians of Ukrainian heritage and recently arrived refugees from Ukraine unfurling and holding up the large Ukrainian flag today while singing their national anthem. Because of our friendships with Ukrainian artists, it was important to stage the showcase and unfurl the Ukrainian flag among the sculptures. Everyone who saw the flag and heard the singing was moved by the experience.”

Donations to directly support Ukrainians displaced by war can be made to ukrainecrisisappeal.org