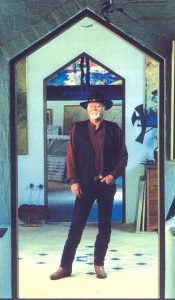 Robert in his home, courtesy of the Juniper family.

Bob Juniper was one of the great Australian artists of his generation. Widely known and collected as a painter who was recognised as a Western Australian State Living Treasure in 1998, Bob was also an avid if sometimes frustrated sculptor who exhibited four times at Sculpture by the Sea in Perth and Sydney.

Robert Litchfield Juniper was born in Merredin, Western Australia where his father, Richard, a cockney Englishman, worked as a welder’s mate on the C. Y. O’Connor goldfields pipeline. As a young man, Richard often had to cover for his boss, teaching himself how to weld in the process, and this skill was absorbed by Robert and his younger brother Geoffrey and passed on generationally.

In 1937 Richard moved his family to the South East of England. This period was later described by Bob as the start of a “great adventure”. Arriving in England in the 1930’s must have seemed a surreal change of environment after the harshness of the WA desert.

With the advent of World War II, Bob and his younger brother would sneak out at night on to the rooftop of their home and watch the dogfights whizzing overhead, and the city of London burning. Towards the end of the war the boys and their mother were evacuated to the estate of Cholmondeley Castle in Cheshire. This is where young Robert encountered the curious sight of a bull in an iron mask. The creature had been restrained in a manner as to prevent it from charging at people. This image stayed with the impressionable boy his whole life, and was later reproduced by him in sculpture and painting.

Bob’s mother, Linda recognised that the young Bob had considerable artistic talent and, determined that this should be fostered, enrolled him and his brother Geoffrey at the eckenham School of Art.

Returning to Western Australia in 1947, Bob got a job in the southwest and with the aid of a pair of boots and an axe purchased “on tick” from a local hardware store, he cleared 100 acres of Jarrah re-growth by hand. This work no doubt accounted for his imposing frame. Several other menial jobs followed until he found a position at Perth College, teaching art and history. He confided to his son, Ben that he was often “saved by the bell”, allowing him time to research a question he’d been asked in class. This attitude stayed with him throughout his life. He was an avid reader and researcher, and amassed an impressive library. Teaching jobs at prestigious boy’s schools, Hale and later Guildford, followed until his retirement from teaching in 1974 to be a full time artist.

Whilst Bob was a prolific painter, and this formed the bulk of his creative work, his sculptures are much rarer. Bob once confided in Ben that he was envious of the era in which his son lived. When asked why, he replied that he thought of himself as a sculptor who made paintings for a living. Sculpture, he felt, was little understood and poorly patronised when he was a younger man. This did not stop him from making a great number of excellent sculptures. His interest in sculpting was passionate and consuming. He was naturally skilled in the manipulation of copper and soldering, albeit self taught, which led to experimentation with thermal piercing, ground glass or hot enamel work and, later, casting in aluminium and bronze.

Bob exhibited two important works created in the 1970s at Sculpture by the Sea, Cottesloe in 2010 and 2011, ‘Plant Form’ and ‘Plant Form 11’. Both had been created with the use of high explosives. His son, Ben recalls, “It was really great fun and very exciting. Darlington, where we lived on the Darling escarpment outside of Perth, was surrounded by disused quarries. One of Bob’s good mates had a blasting license which was put to good use. Old sheets of 8mm thick mild steel were no match for the awesome power of gelignite. Weighted down with rocks (after some experimentation) these were propelled into the air with such force that a 1.2m x 2.4m sheet would appear as a tiny spec in the sky and then come crashing back to earth looking like a giant piece of buckled, rusty foil while we ran to shelter around a corner in case of projectile injury. These sheets were then ‘exploited’ using an oxy torch to cut out shapes which were then welded into various compositions back at our workshop. I don’t think one would be allowed to do that now”.

‘Angler Fish’, exhibited in Sculpture by the Sea Cottesloe and Bondi in 2007, was a much more recent work and exemplifies both Bob’s ability to delegate work to great effect and his well developed sense of humour. Bob produced the original model in copper, roughly 1:20 scale, and the finished full scale work was to be finished by a third party. In this case, the ‘party’ was the famous and faithful colleague, Ron Gomboc, working under Bob’s close supervision, which generally involved observing, advising and cold beer.

‘Xanthorrhoea and Tree Form’, to be exhibited in this year’s 12th Sculpture by the Sea, Cottesloe exhibition, was similarly created by Bob, improving on an original series of maquettes. These ‘larger than life’ works are in a sense the pinnacle of understated ‘shadow play’ and the last sculptures of their size to be offered by his children (Sato, Ben/Benedict*, Sam/Damian* and Bec/Rebecca*).

Bob’s ability to ‘say more with less’ was unmatched and no doubt the result of a lifetime’s work in seeing and making.

Having wholeheartedly embraced the concept of Sculpture by the Sea as an artist, Bob was also an occasional source of advice and a member of the exhibition’s Curatorial Panel along with his good friend Janet Holmes à Court AC in 2010. Visiting the Cottesloe exhibition each year and the Bondi exhibition several times, he enjoyed the transformation of the public response to sculpture on both sides of Australia that followed the introduction of Sculpture by the Sea, marvelling at the number of visitors and enjoying the establishment of a major new creative outlet for artists. 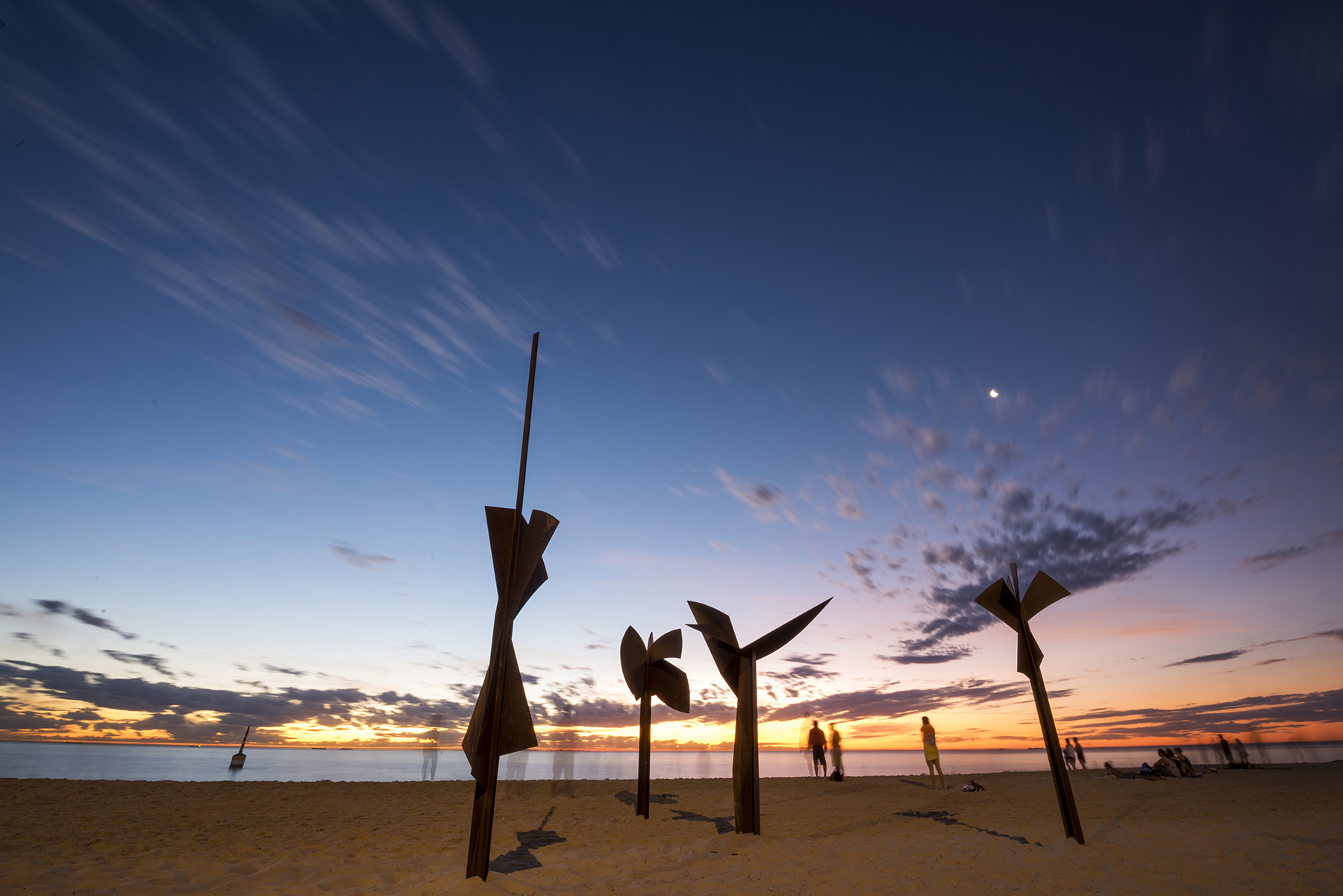