We are excited to announce that celebrated Chinese artist Zhan Wang will exhibit for the first time in Western Australia at Sculpture by the Sea, Cottesloe 2018.

Considered one of the most important contemporary artists of the late 20th century and early 21st century, Zhan Wang will travel to Perth for the first time as the Tourism WA Invited International Artist to exhibit a new work created specifically for Sculpture by the Sea, Cottesloe 2018 titled Floating Rock.

The two metre high and four metre wide stainless steel rock will float on the water at Cottesloe Beach and the mirrored surface of Floating Rock will glitter in the sun and no doubt fascinate the beachside audience. This important work will also reference and question the adaptability and sustainability of Chinese cultural tradition in a contemporary world. 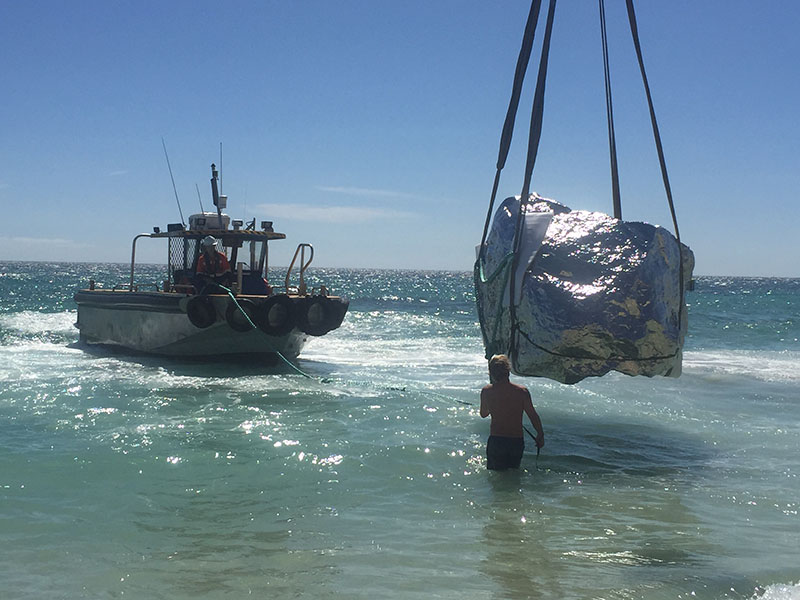 This new work is from Zhan Wang’s renowned ‘Artificial Rocks’ series.  Although the artist has worked in this series since 1995, this is the first of his floating sculptures to be anchored to the sea floor as his previous works in the open ocean have either been left to float where the tides took them or have been on pontoons.

Said Zhan Wang: “I am very much looking forward to my first visit to Australia. I have long heard of a sculpture exhibition on the West Coast; these sculptures stand by the sea with a background of water, these works of art look like a fairyland play-thing! Every year, there are new works and tourists who come from all over the world are constantly surprised. I am very grateful to the organisers for inviting me this year and for allowing me to realise a somewhat adventurous piece of work – a boulder floating in the sea.”

“Often, stones remain permanently on the shore; in the mountains or under the water and underground in a steady state. But the stone work I provided can float on the water and will be constantly moving and reflecting the surrounding colour and light. The natural undulations of the stone are carefully knocked out one by one and finally polished and polished into a shell-shaped shiny metallic stone, named in Chinese: Artificial stone. We cannot say clearly what this future is like, just as it is floating at sea and in danger of running into waves, it is precisely this uncertain aesthetic that I hope my work brings to you. A feeling of change, colour, freedom, or even hidden crisis, like ours, a rich and even chaotic world.”

Founding Director of Sculpture by the Sea, David Handley AM, said: “It is thrilling to be exhibiting a work by Zhan Wang that has been specially commissioned for Sculpture by the Sea, Cottesloe.  The sculpture will sit serenely on the calm water, glisten as the sunsets and be buffeted by waves when the wind is up. The best places to view the sculpture will be from the Cottesloe groyne and the beach and grass under the trees south of Indiana’s. And a tip for regular ocean swimmers: look ahead once you pass the pylon heading south.”

Tourism Minister Paul Papalia said the State Government was pleased to welcome Zhan Wang as Tourism WA’s Invited International Artist for Sculpture by the Sea, Cottesloe:  “Zhan Wang is one of the most internationally renowned sculptors and featuring his extraordinary work as part of Sculpture by the Sea, Cottesloe helps elevate the event’s reputation on a global scale,” Minister Papalia said. “His sculpture, and all the other extraordinary ones on show this year, will not only help showcase our pristine coastline around the world, but promote Western Australia as a vibrant tourism and event destination. The State Government, through Tourism WA, is a proud supporter of Sculpture by the Sea, Cottesloe and we have signed a three-year deal to fund the event until 2020.” 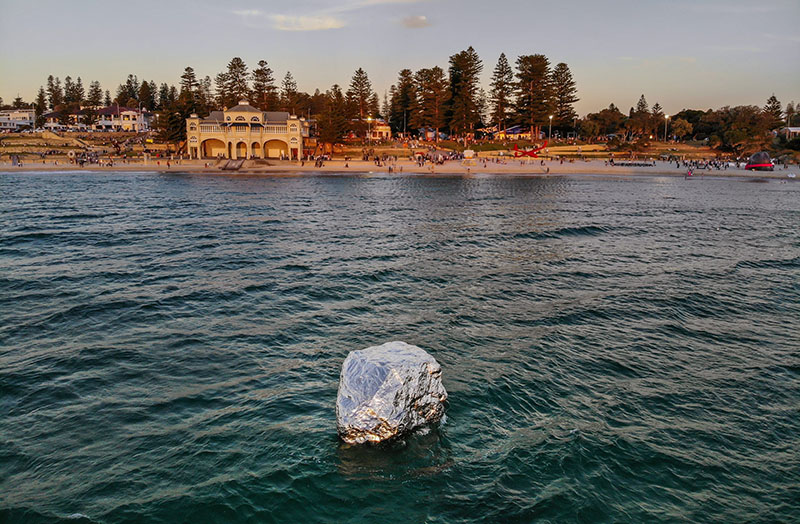 Zhan Wang is also exhibiting once of his smaller artworks, Artificial Rock No. 63, in ‘Sculpture Inside’, an indoor exhibition of small-scale sculpture that runs alongside Sculpture by the Sea, Cottesloe. In the intimate surrounds of the ‘Sculpture Inside’ gallery, visitors can expect to be mesmerised by the artwork’s reflective, rippling surface.

Zhan Wang lives and works in Beijing where he is an Associate Professor of Sculpture at Central Academy of Fine Arts.  His work became the first Chinese contemporary sculpture to be collected by the famous Metropolitan Museum of Art in New York, one of the premier art institutions in the world.

From the start of his career, Zhan Wang began freeing his work from the traditional social realism of Chinese 20th century sculpture to experiment in more conceptual sculpture. This idea carried through to the acclaimed series, ‘Artificial Rocks’ where he recreates the strangely eroded, naturally occurring rocks, long revered by Chinese scholars for their sense of energy, dynamism and positive and negative space.

Featured in Chinese gardens for centuries, the rocks have been reproduced by artisans in traditional materials of jade, glass and ceramic, and Zhan Wang extends the tradition by recreating the rock in the industrial medium of stainless steel. The artist pounds, bends, heats and moulds sections of steel across the landscape of the rock before peeling away and welding a form that is a cold and hollow replica with a new mirrored surface reflecting the exterior, industrialised world. His work poses questions about the adaptability and sustainability of Chinese cultural tradition in a contemporary world.

Sculpture by the Sea, Cottesloe marks its 14th anniversary in 2018. In recent years, thanks to the Tourism WA Invited Artist program, the exhibition has become an established event on the international sculpture calendar, with Cottesloe now a destination target for sculptors around the globe.

With about 500 different sculptors exhibiting at Cottesloe since the inaugural 2005 exhibition, some of the best and most famous sculptors of the world have exhibited at Cottesloe including: Sir Anthony Caro OM, Tony Cragg and Zadok Ben-David from England; Keizo Ushio, Kozo Nishino from Japan; David Černỳ from the Czech Republic; Steinunn Thórarinsdóttir from Iceland; Jörg Plickat from Germany; Fletcher Benton, Peter Lundberg from the USA; Keld Moseholm from Denmark; and Chen Wenling, Li Wei, Sui Jianguo, Guan Wei and Wang Shugang from China, who have now been joined by Zhan Wang.