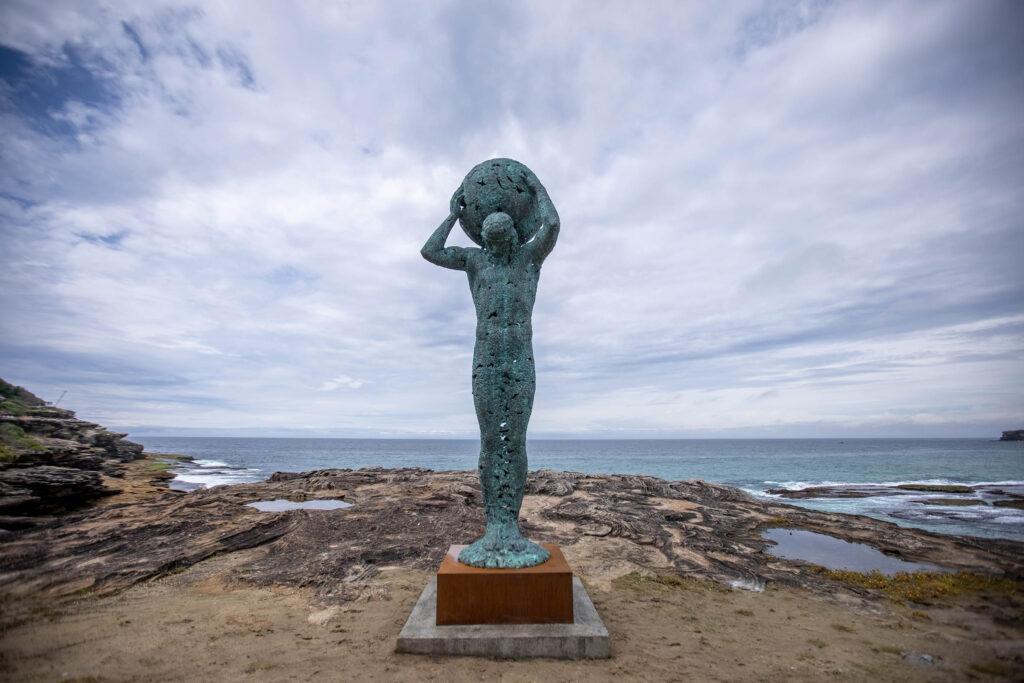 Sculpture by the Sea, Bondi will showcase artworks by sculptors from the Ukraine as a highlight of this year’s exhibition and to raise funds for Ukrainian refugees and those displaced by the war.

Kulikova said: “The day-to-day life in Ukraine these days isn’t limited to the Russian invasion. It is also about resistance and unity as parts of our genetic code and our culture. Highlighting our intangible and material heritage for the international community is of utmost importance to promote solidarity with Ukraine.”

In a demonstration of solidarity with the people of Ukraine, the Ukraine Showcase was borne out of the relationship between the Australian not for profit organisation Sculpture by the Sea and Ukraine both before and during the current Russia-Ukraine War, that began with the exhibition of Egor Zigura’s sculpture on the Tamarama headland in Sculpture by the Sea, Bondi in 2019. Egor and his twin brother Nikita were selected to exhibit in the Covid-postponed 2020 exhibition.

In early 2021, the City of Mariupol on the Black Sea coast of Ukraine approached David Handley, the Founding Director of Sculpture by the Sea, to help organise an international sculpture exhibition on its beaches for late 2021. Planning for the exhibition stopped some months later due to the increased Russian military activity on the previous ceasefire border 15km away. From February 24 this year Mariupol suffered three months of terrible bombardment and siege and is now occupied by Russia.

The Mariupol exhibition organiser Katya Taylor, Founder and CEO of Kyiv based Port. Cultural Projects Agency – who became a refugee on the western border of Ukraine in March this year – reached out to Sculpture by the Sea to take part in the international ‘Artists Support Ukraine Foundation’. As part of this global movement, a giant 18m x 12m Ukrainian flag was unfurled at Sculpture by the Sea, Cottesloe 2022 to show support for the people of Ukraine and to raise funds for Australia for UNHCR’s support of Ukrainian refugees. 11

Founding CEO & Artistic Director of Sculpture by the Sea, David Handley, said: “With Russia’s invasion of Ukraine starting just days before our exhibition on Cottesloe beach opened earlier this year, we felt it wrong to be celebrating in Australia with artists from around the world while people we had worked with in Ukraine had their lives uprooted by war. The unfurling of the 18m long Ukrainian flag on Cottesloe beach meant a lot to our Ukrainian friends and we wanted to do more. This led to seeing if it might be possible to get access to a sufficient number of sculptures to have a showcase of works by Ukrainian artists at Bondi. Viktoria Kulikova took up the challenge as Curator and we are delighted to be exhibiting the four sculptures on the coastal walk and six smaller sculptures in ‘Sculpture Inside’, our indoor exhibition in the walk-in marquee in Marks Park on the south Bondi headland.

“Back in Australia, the Ukrainian connections within Sculpture by the Sea date back to 1998 when Orest Keywan first exhibited in Sculpture by the Sea, Bondi. He has exhibited every year since and received the major award twice. Technical Consultant & Chief Installer, Yuri Humeniuk, who is also of Ukrainian heritage and has worked on almost every exhibition since 2004, will oversee the installation of the sculptures by the Ukrainian artists, which is very special.”

Sculpture by the Sea is donating all of its commission on the sale of the sculptures by the Ukrainian artists to the Ukraine Crisis Appeal, and the artists are also donating 10% of the sale price of their sculptures. It is hoped a total of over $100,000 will be raised to support Ukraine and Ukrainians.

This has only been made possible thanks to all of the hard costs of the showcase being covered by long standing donors to Sculpture by the Sea. The Howarth Foundation kindly offered to pay for the freight of the sculptures from Europe to Sydney. The artists airfares have been covered by the Mostyn Family Foundation, Gwyneth & Tony Lennon Family Foundation, and Charles and Eva Curran, while the artists accommodation has been provided by The Blue Hotel at Bondi beach. Sculpture by the Sea also recognises staff and artists of Ukrainian heritage include Double Decade Club member Orest Keywan and Technical Consultant & Chief Installer, Yuri Humeniuk.

Vasyl Myroshnychenko, Ambassador of Ukraine to Australia, said: “The war is being fought on many fronts and culture is one of those. The dedication of Sculpture by the Sea, Bondi 2022 to the Ukraine shows how artists across the globe and people in cultural management are affected and deeply moved by this war – rallying support for our country, raising funds and bringing awareness to new people. This war has provided such a huge impetus for creativity, which I see in the Ukraine has inspired many artists, songwriters and sculptors in their work, and it is wonderful to see that creativity spread out across the world, including to Australia.”

Dan Wolody, President of the Ukrainian Council of NSW, said: “The decision of Sculpture by the Sea to support the Ukraine Crisis Appeal this year is not only a great financial and morale boost for the people of Ukraine, it also sends a strong message of solidarity between Australian and Ukrainian communities. Events like this bring the war to ‘front of mind’, which is where we need to keep it if we are to win the war for Ukraine’s freedom.”

The showcase of sculptures by Ukrainian artists will join over 100 sculptures from 16 countries around the world on Sydney’s breathtaking 2km Bondi to Tamarama coastal walk at Sculpture by the Sea, Bondi 2022, the world’s largest annual free-to-the-public outdoor sculpture exhibition, running from 21 October – 7 November.

Egor Zigura, Nikita Zigura and Oleksii Zolotariov (Zolotar) will visit Australia to attend the launch of Sculpture by the Sea, Bondi 2022 on 21 October, before Egor and Viktoria travel to the Snowy Valleys in southern NSW for the installation of Egor Zigura’s work “Colossus”. The work will be a new highlight of the Snowy Valleys Sculpture Trail, Australia’s newest major public sculpture collection, with Zigura donating 25% of the proceeds from the sale of ‘Colossus’ to support the Ukrainian military.

Egor Zigura said: “Despite the war, the support of our partners has allowed my artist colleagues and myself to continue our work. In these last few months, my every free moment has been dedicated to helping my family and friends, as well as fundraising for the army and for those affected by the war. The entire civilized world needs to stand united for our joint victory in order to fight back against the aggression.”

Stretching across 100km of the Snowy Valleys Way – the stunning back road between Sydney and Melbourne – the Snowy Valleys Sculpture Trail features 28 works in collections across seven locations in the towns of Adelong, Batlow, Tumbarumba, the hamlet of Tooma and the Tumbarumba wine region cellar doors at Courabyra Wines, Johansen Wines and Obsession Wines. 12

This Bushfire Local Economic Recovery project was conceived in partnership with the local communities and Sculpture by the Sea, and is jointly funded by the Australian and the NSW Governments under the Disaster Recovery Funding Arrangements, to aid in the socio-economic recovery of the Snowy Valleys after the devastating 2019/20 NSW bushfires. Destined to become a world class sculpture collection, the Snowy Valleys Sculpture Trail aims to encourage more tourists to visit the region.

Perhaps the final word for now on the Ukraine and Australia collaborative sculpture exhibitions is from Katya Taylor, the organiser of the cancelled exhibition in Mariupol, “I still believe we will make the Mariupol project happen as soon as we free Mariupol. It totally must happen!”