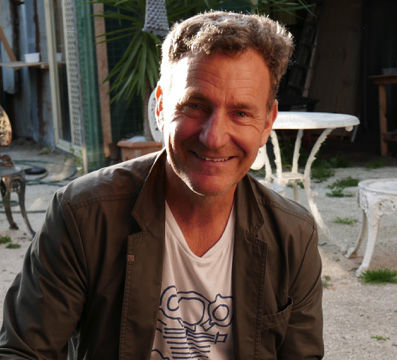 Sculpture by the Sea is thrilled to announce that one of the most important kinetic sculptors in the world, New Zealand sculptor Phil Price will exhibit for the first time at Sculpture by the Sea, Cottesloe 2019 as the Tourism WA Invited International Artist.

Since 2000, Phil Price has developed a significant international reputation for his wind activated kinetic sculptures. He is regarded as one of the leading kinetic sculptors of his generation, with his work widely acknowledged for its breathtaking beauty, an evocation of the natural world and extraordinary design.

Price is creating a new 7m high kinetic work titled Ipomoea for Sculpture by the Sea, Cottesloe which will surprise and delight audiences from 1-18 March overlooking the famous white sands of Cottesloe Beach.

Said Phil Price: “I have never visited Western Australia so the opportunity to be the Tourism WA invited International Artist is very exciting and I am very much looking forward to sharing my work with the people of Western Australia, meeting the Sculpture by the Sea team, supporters and other artists. It’s been a very enjoyable process the last few months with the development of Ipomoea as a concept and now created as a fully large scale kinetic sculpture. I’ll be very pleased to show this new work to a new audience in such an iconic city beach location.”

Price first exhibited outside New Zealand at Sculpture by the Sea, Bondi in 2009, where he received the Allens People’s Choice Prize. He has since risen to international prominence creating sculptures for significant private collections globally, including the USA, Switzerland, Holland, Austria, Vietnam, Argentina, the United Kingdom, Australia, and New Zealand. His works have been acquired or commissioned for major public collections including the City of Aarhus, Denmark, across New Zealand and Australia including the Auckland Viaduct, McClelland Gallery Victoria, the Transfield Collection, Sydney and Canberra International Airport. Phil Price exhibited at Sculpture by the Sea, Aarhus – Denmark in 2009, 2011 and 2013 and at Bondi again in 2003. This year’s Sculpture by the Sea, Cottesloe will be the first time he has exhibited in Western Australia.

Phil Price will be speaking about his work at a public forum at the Art Gallery of Western Australia at 6pm on Wednesday 27 February. This is a free event, please register below.

“Securing the talents of Phil Price will be a wonderful drawcard for this popular event and also provide an opportunity to raise the profile of our State to one of our key international markets.

“Events are a focus area of the State Government’s Two-Year Action Plan to attract more visitors to our State as they provide people with a definite, time-based reason to visit, boost our economy through visitor spend and showcase our State through media coverage.

“We look forward to welcoming more visitors from New Zealand and around the globe to view Phil’s finished piece within the stunning setting of Cottesloe Beach.

“To truly experience what makes WA extraordinary, we encourage visitors to extend their stay in WA to explore our vibrant, modern city as well as the diverse natural attractions and exciting events offered by our regions.”

This year marks the 15th anniversary of Sculpture by the Sea, Cottesloe, which is Perth’s largest free to the public event, attracting an estimated 240,000 visitors to explore the art and creating Perth’s own version of the Italian passeggiata with thousands of people wandering among the sculptures on Cottesloe Beach at sunset each evening.

Founding Director of Sculpture by the Sea, Cottesloe, David Handley AM said, “In recent years, thanks to the support of the Tourism Western Australia Invited International Artist program, Sculpture by the Sea, Cottesloe has established its place on the international sculpture calendar with a reputation for exhibiting the leading sculptors of the world alongside local senior to emerging WA artists. We are delighted to exhibit these artists for the first time to the people of WA and to stage an exhibition for local artists alongside leading international sculptors while developing international networks for local artists. Thank you to Tourism Western Australia for its long term support of the exhibition.”

Among the more than 500 different sculptors who have exhibited at Cottesloe since the inaugural 2005 exhibition are some of the most famous sculptors of the world including Sir Anthony Caro OM and Sir Tony Cragg from England; Zadok Ben-David from Israel; Zhan Wang, Chen Wenling, Li Wei, Sui Jianguo and Wang Shugang from China; Keizo Ushio and Kozo Nishino from Japan; David Černỳ from the Czech Republic; Steinunn Thórarinsdóttir from Iceland; Jörg Plickat from Germany; and Fletcher Benton and Peter Lundberg from the USA.

Ipomoea will be exhibited alongside over 70 sculptures from a broad range of Western Australia and interstate artists, as well as a large gathering of international artists from USA, Israel, China, Japan, South Korea, Sweden, Norway, Finland, Italy, Slovakia, Austria, Greece, and Andorra.