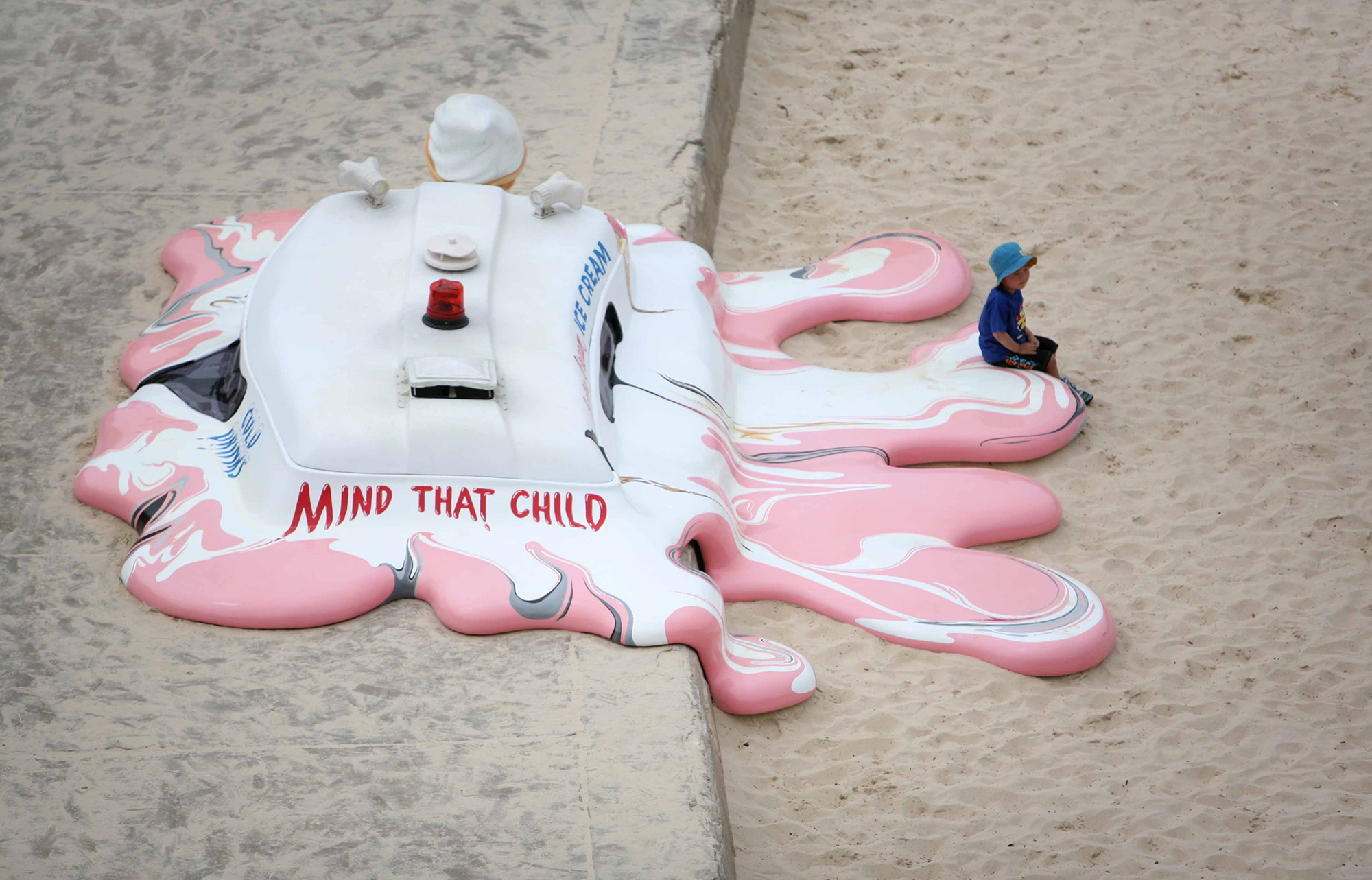 The Glue Society, ‘Hot with a Chance of a Late Storm’, Sculpture by the Sea, Bondi 2006. Photo L Beaumont.

“That depends on where you want to end up.”– the Cheshire Cat

Lewis Carroll, Alice’s Adventures in Wonderland & Through the Looking-Glass

In 21 years, Sculpture by the Sea at Bondi has grown from a single-day event organised by a group of volunteers on a shoe-string budget into a multimillion dollar professional operation that runs over about three weeks and usually attracts over half a million visitors. It is the largest and arguably the most significant sculptural event in the world and it is increasingly setting the agenda for sculptural practice in this country. However, in essence, Sculpture by the Sea has not changed since its inception and has remained free, democratic and secular – a mass event that has delivered without charge sculpture of a very high order to a mass audience. The two-kilometre coastal walk from Bondi Beach to Tamarama Beach once a year transforms into a wondrous temporary sculpture park that sparkles with unexpected treasures, challenging installed sculptural environments and breathtakingly beautiful artworks.

For many people, Sculpture by the Sea was their first opportunity to experience sculpture of a high order that was accessible and presented in a beautiful, natural environment. In the process of coming of age, Sculpture by the Sea has had a major impact on the development of sculpture in this country through the creation of a “family of sculptors”. Not infrequently, it became the spark which had led to a life-changing decision to become a sculptor. Let this family speak for itself. Tango Conway recalls, “I frequently went to Sculpture by the Sea as a kid with my primary school/high school. Mostly I saw it as an escape from the everyday, inside school walls and a fun adventure.” Amelia Skelton recalls,

“One of my earliest memories of Sculpture by the Sea was seeing the melted ice cream truck in 2006. It was so exciting to realise you could do something that fun as an adult.”

Conway and Skelton were sufficiently inspired to go and study sculpture at the National Art School in Sydney and combined as an exhibiting duo, Skelton & Conway, who are first time exhibitors at Bondi in 2017.

Harry Vasutabu, originally from Fiji, in 2000 was staying with his family in Sydney, when they decided to visit Sculpture by the Sea. He recalls, “Visiting Sculpture by the Sea for the first time was inspiring and captivating, I had never seen sculptures like this before. The most vivid memory I have was seeing the large fallen piece of sandstone covered in bakelite kettle penguins by Ian Swift. Now living in Bronte, I do this coastal walk regularly and to this day that image still stands out in my mind. This experience is what inspired me to take part in the exhibition years and years later.”

Samantha Stephenson shares a similar memory. “I was in high school when I first visited Sculpture by the Sea, and for the first time I was seriously excited about the possibilities of sculpture. I haven’t many memories of visiting galleries growing up, however I certainly cannot forget the first time I visited Sculpture by the Sea. The accessibility of the outdoor space was both inviting and engaging, combining my love of art and the landscape. Following high school, I went on to study and work in another field. Feeling unsatisfied, I returned to my real passion … I held onto my hopes of ‘one day’ being a part of the Sculpture by the Sea exhibition, and in 2014 was successful. It was even more heart-warming to learn I’d received a Clitheroe Foundation Emerging Sculptor Mentorship, which saw my sculpture realised in the scale I’d longed for, as well as having the guidance of an artist I respected.”

Sophie Lanigan and Isobel Lord recall, “As emerging sculptors and Bondi locals, we have both visited Sculpture by the Sea annually. As children, we knew it as an adventurous day out, more recently we have come to appreciate it as sculptors in our own right.”

Lanigan writes, “During my first year of university, I interned two days a week for three months at Sculpture by the Sea headquarters before working as a Site Office Assistant during the Bondi 2014 exhibition. The ‘can-do’ attitude that prevails at Sculpture by the Sea spurred me on to start thinking about designing and applying myself. When designing such large, public, outdoor works there is so much more to consider than just the work’s formal qualities – Sculpture by the Sea taught me a great deal about organisation, communication and getting things done. In a way, I got the inside scoop, then spent the rest of my university years improving my design skills and once graduated prepared an educated application with my best friend and collaborator, Isobel Lord.”

While David Hashimoto recalls, “Due to my great experience with Sculpture by the Sea (which was my first public sculpture), I remain passionate about art and to this day continue to create new work.” For Elyssa Sykes-Smith, “Access to an amazing artistic community has been one of the most important gifts. Leaving the National Art School, I felt like I was standing on the edge of a cliff, stepping away from my community and about to jump into the world of trying to exhibit and be an artist without a handbook. I know I am so lucky to have been involved with Sculpture by the Sea for so many years with such consistency. It has helped me feel like I have been part of something and many of the staff and exhibiting artists now seem like ‘art family’.”

Nicole Larkin observes another path to becoming a professional sculptor, “despite having a background in architecture. Sculpture by the Sea was a unique opportunity and bounding board from which my career as an emerging artist began. This was further nurtured by the Clitheroe Mentorship program in which I participated throughout 2016. Without these opportunities it’s very difficult to imagine a pathway to working as a sculptor.” The artist Lucy Barker writes, “Sculpture by the Sea was the first to provide a platform for artists like myself who work in non-traditional ways and spaces and who like to involve the audience, to one degree or another. At Sculpture by the Sea art really is for the people, not to be hidden away … you gain access to a unique exhibition space; not just because of the location, but because of the sheer number of people who visit, and the fact they are often not your typical gallery goers.”

The first 21 years has seen Sculpture by the Sea transform the sculpture scene in Australia, for its future, in the words of the Cheshire cat, let us see where it wants to end up. 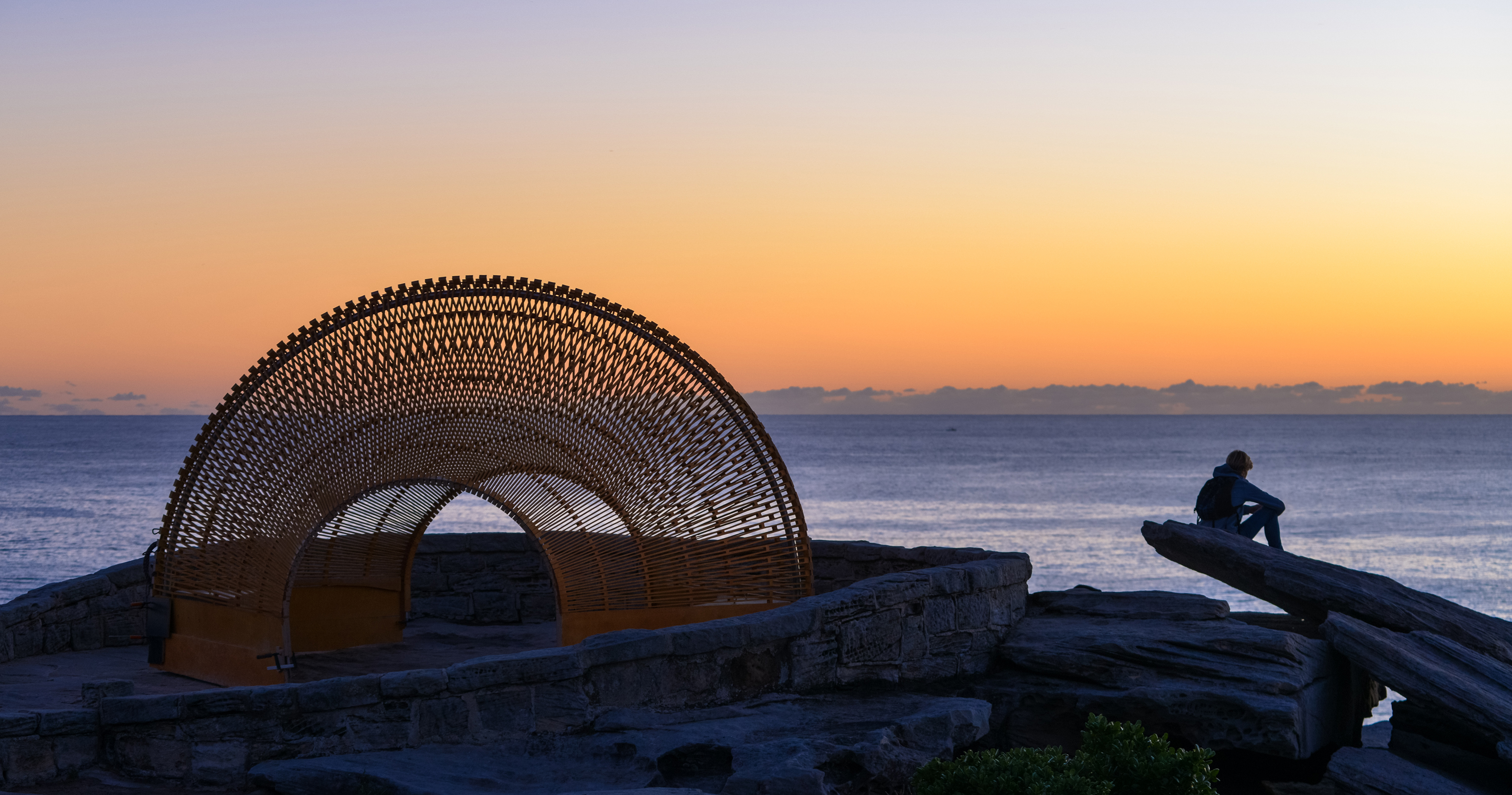