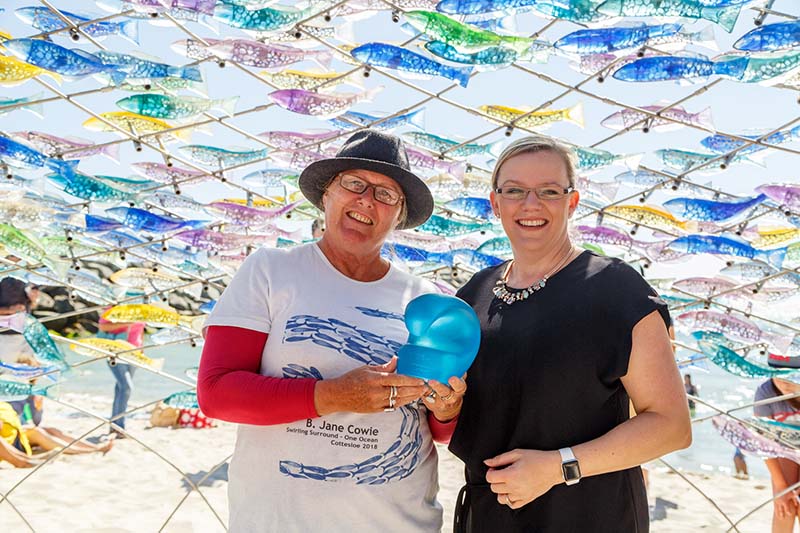 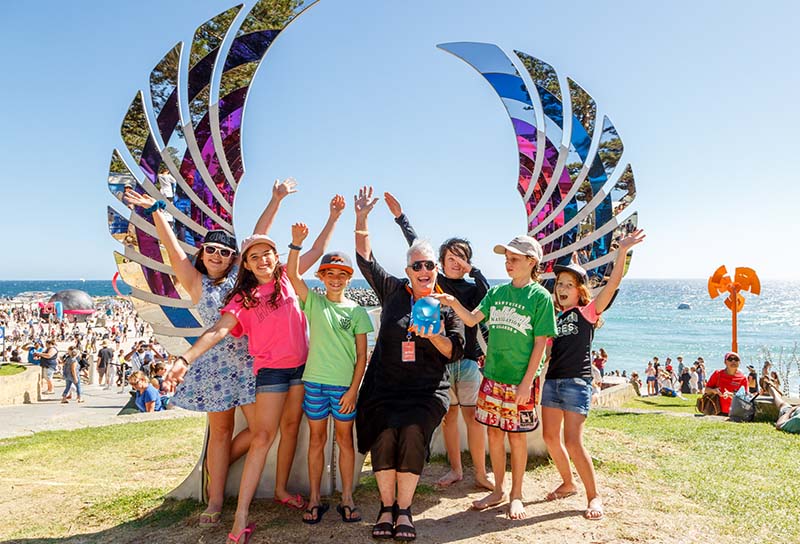 Singapore-based Australian artist B. Jane Cowie was announced as the recipient of the EY People’s Choice Prize for her interactive sculpture Swirling Surround on Sunday 18 March, 2018.

The stunning sculpture Swirling Surround depicts 999 ARTglass fish in a dome-shaped structure, which creates the illusion of a school of fish swimming amongst the visitors that are encouraged to sit inside the sculpture.

“Congratulations to B. Jane Cowie on her fantastic sculpture which has captured the hearts and minds of the people of Western Australia,” said Drummond.

“The exceptional artists of this year’s exhibition have demonstrated the positive contribution arts make in our community. That is why EY is committed to supporting the arts as they play a critical role in contributing to a vibrant economy, a diverse culture and community and in educating and inspiring our people.

“This is our fifth year of sponsoring Sculpture by the Sea and the EY People’s Choice Prize and we are very proud to be involved. Not only does this iconic exhibition showcase our stunning Cottesloe Beach but by being free for the community, it provides people who sometimes don’t have the opportunities to encounter local and international art.

“Thank you to David and the team at Sculpture by the Sea for ensuring the people of Perth continue to enjoy this unique and world class exhibition.”

Denise Pepper was also announced on Sunday as the recipient of the Kids’ Choice Prize of $2,000 for her sculpture Waiting in the Wings which delighted children of all ages.

Inspired by Cottesloe’s vista, Pepper’s sculpture used marine grade aluminium and coloured mirror finish to create a set of wings that frame the picturesque coastline. Pepper was the 2017 recipient of the WA Sculptor Scholarship that provided her with the opportunity to exhibit at Sculpture by the Sea, Bondi 2017.

Sydney-based film and television producer Rebel Penfold-Russell, a long-time friend of the exhibition, along with her sons Emrys and Jasper, provide the Kids’ Choice prize as a part of their private support of Sculpture by the Sea in both Perth and Sydney.

“Thank you to everyone who has made this year’s exhibition so enjoyable: the artists, our supporters and the people of Perth and south west WA,” said Founding Director, David Handley. “It is such a delight to walk among the evening crowds milling around the sculptures, creating Perth’s passeggiata. The atmosphere of thousands and thousands of people make it feel as if the whole of Perth, like an Italian village, is out walking together.”