Now you see me, now you don’t 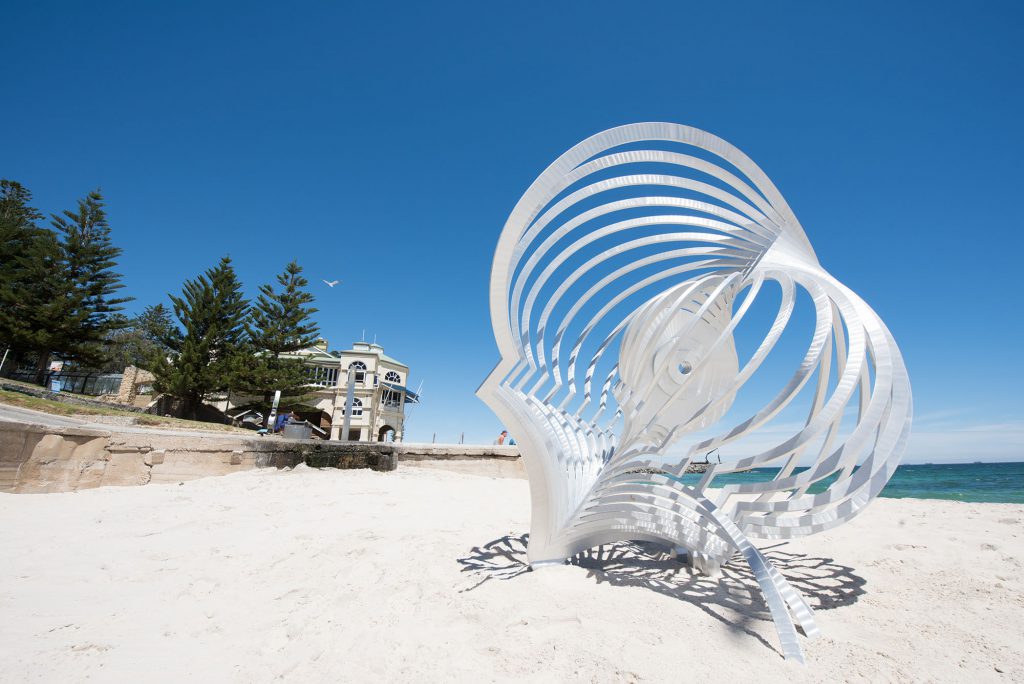 The scope and scale of the Perth and Sydney exhibitions is unprecedented anywhere in the world and requires diligent long-term planning and stakeholder commitment.

At the end of February each year, Sculpture by the Sea moves into Cottesloe, transforming its scenic coastline into a mecca for 3D art appreciation. Stepping on the heels of artists still installing, crowds descend, engrossed in this stunning open-air gallery. Since its inception in 2005, Sculpture by the Sea, Cottesloe has showcased enthralling sculptures by some 500 artists from 38 countries worldwide, including many famous names (Sir Anthony Caro, Sir Tony Cragg, Zadok Ben-David, Chen Wenling among others) alongside first time exhibitors, and each year more than 30% of exhibitors hail from WA – by far the largest contingent of artists.

Sculpture by the Sea, Cottesloe is clearly treasured. The total attendance in 2018 was a staggering 240,000 visitors. Since 2005, more than 28,000 students have participated in the heavily subsidised Alcoa Schools Education Program, while this year alone 2,500 students will enjoy artist-led tours and sculpture making workshops. A further 5,000 students will visit on self-guided excursions. Accessibility programs are also in high demand. Since 2010, 4,474 people with disability have taken a free bespoke tour tailored to their individual needs.

It is important to emphasise that Sculpture by the Sea, Cottesloe and its sister exhibition at Bondi in Sydney are not only major international sculpture events, but are free to the public. The scope and scale of the Perth and Sydney exhibitions is unprecedented anywhere in the world and requires diligent long-term planning and stakeholder commitment.

Local support for purchasing sculpture is strong, evidenced by the Town of Cottesloe’s superb collection of 18 diverse sculptures from across WA and the world that activate the foreshore, such as April Pine’s (WA) shape-shifting surfer and Peter Lundberg’s (USA) gateway style towering triangle. At a major intersection along the busy Stirling Highway the sublimely carved black granite ‘Dark Night Shine’ by Takahiro Hirata (Japan) commands a moment of quiet reflection.

Other City and Town Councils have followed suit including Canning, Claremont, Joondalup, Melville, Nedlands, Perth, Rockingham, Swan, Victoria Park and Vincent, as well the Burswood Park Authority, the Western Australia Department of the Premier and Cabinet and the WA Museum. All acquired high quality work now on permanent local public display. Rio Tinto gifted the three major award-winning works since 2016 to the City of Busselton. Connections developed during the schools program have resulted in the gifting of several works by artists to primary schools for the continued enjoyment of students. Private collections of sculpture proudly featured in front gardens and on balconies make many heads turn in surprise and admiration, while major collections of international significance are located on properties across WA. The value of all this for Western Australia is immense. 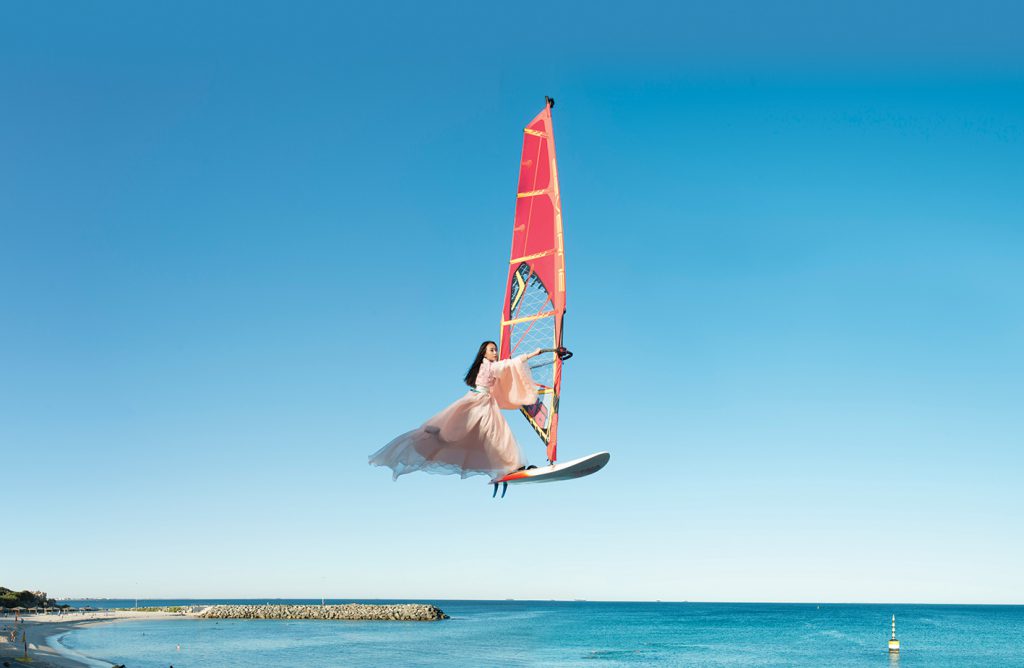 Artists also rise to the challenge and create their best possible work for Sculpture by the Sea. Importantly, this exhibition promotes WA artists on an international platform, which enhances their career opportunities and networks. Eleven WA artists exhibited in Sculpture by the Sea, Aarhus – Denmark between 2009 and 2015 – for many their first overseas exhibition. National profiles have been boosted with seven WA artists having received a $30,000 Helen Lempriere Scholarship through the Bondi exhibition, where a total of 66 WA artists have exhibited since 1999. WA artists particularly appreciate the opportunity of international networking, to learn from other artists, and the bonhomie among artists. The hope of creating a site-specific work or selling work draws WA artists to return each year to Cottesloe or vie to exhibit for the first time. There are few opportunities in the world to exhibit in such a stunning location; Cottesloe’s natural amphitheatre overlooking the Indian Ocean. There is also opportunity to exhibit and sell smaller works at ‘Sculpture Inside’.

Based on its international profile and the successful fostering of 15 annual exhibitions at Cottesloe, and several million dollars of sculpture sales for WA artists, one would assume Sculpture by the Sea is a guaranteed yearly event. Sadly not. Sales figures are deceptive, for while they amount to a considerable injection into the relatively impoverished WA visual arts sector, the majority of artists exhibit at Cottesloe at a loss, they inform exhibition organisers, of on average $10,000. The success of a minority of artists hides the fact that insufficient funds have been raised to cover even the most basic of artists’ costs such as freight – though in recent years thanks to the Australia Council the installation heavy equipment costs are covered. Securing adequate funds is a major year-round activity. Last year 26% of the budget came from corporate sponsors, this year it has dropped to just 8% – the short fall has not been made up. Government funding is insufficient for a major international exhibition of this scale, and difficult to secure, despite considerable returns for the State, its people and economy. Sculpture by the Sea, Cottesloe fosters the arts, tourism, business, education and employment.

This year there are seven first time exhibitors from WA. If not accepted artists should re-apply in the future as the curatorial panels vary year-to-year. Also, due to limited sites, and the wish to have a variety of sculptures, not all quality submissions can be accepted. Our next generation of sculptors needs support, and more. Across Australia, tertiary courses offering Visual Arts are diminishing, and proficiency in sculpture is declining. To help further the careers of ambitious younger artists, in 2016, Sculpture by the Sea, Cottesloe initiated a $10,000 Emerging Artist Mentorship, but sadly, sponsorship for this important initiative was not secured this year.

Despite the behind-the-scene challenges for artists and the not for profit organisation staging the exhibition, Sculpture by the Sea, Cottesloe is a WA tradition. People throng to experience tantalising sculpture on the shore and keep coming back for more, just like the artists, year after year. Long may it continue. 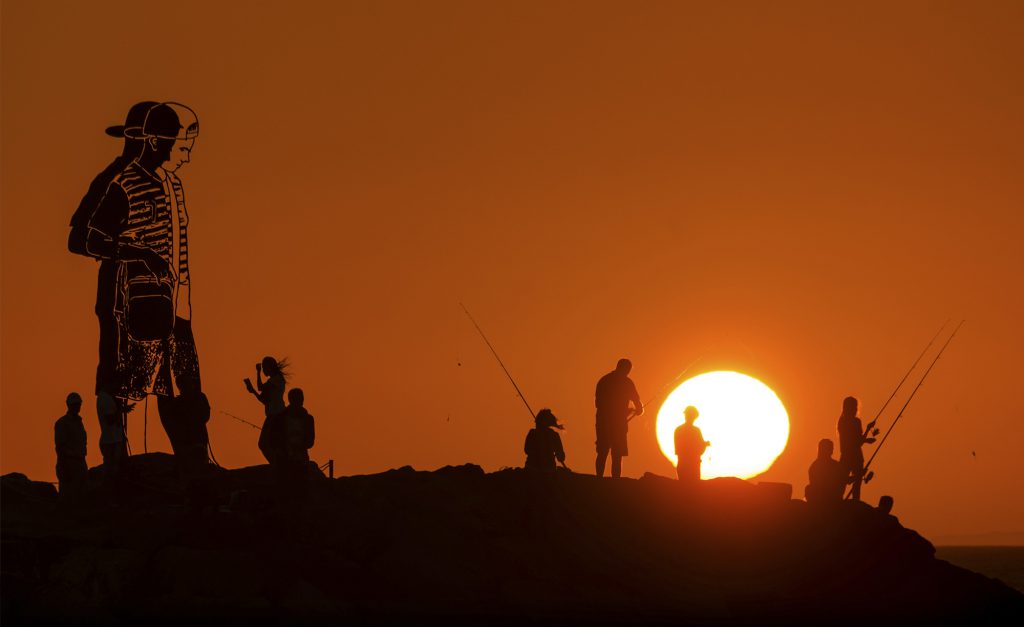