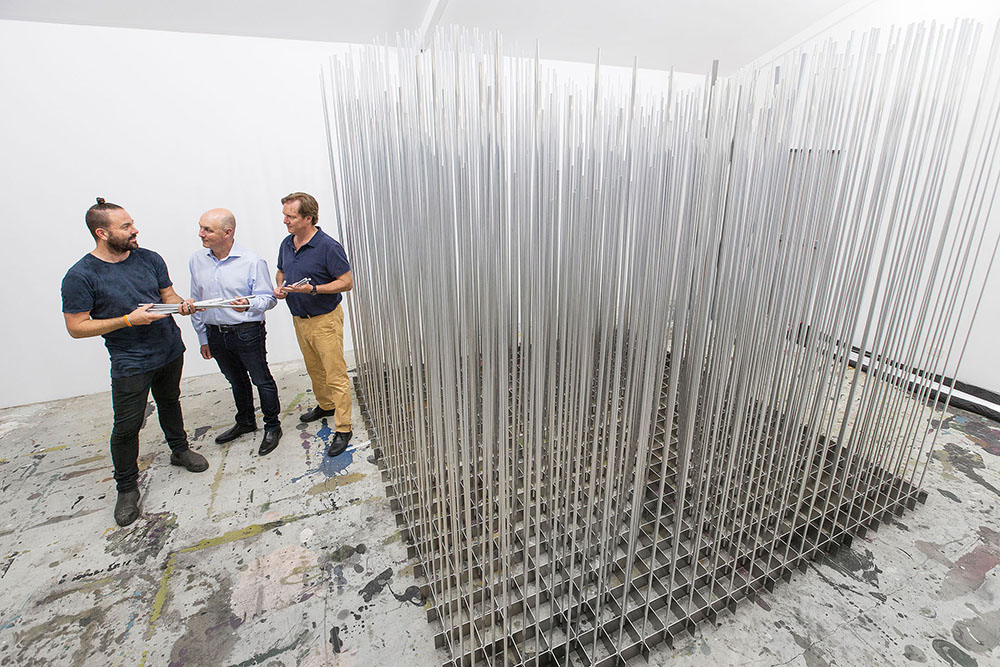 Sculpture by the Sea and Alcoa of Australia are pleased to announce the highly regarded Western Australian visual artist Miik Green as the inaugural recipient of the Alcoa Aluminium Sculpture Award of $10,000.

His work ‘Thicket 018’ is a large structure of 6mm aluminium rods that will reflect and shimmer as viewers approach, creating exciting optical moments that will capture the imagination of visitors to the exhibition from 1-18 March.

Said Miik Green: “My work is about opposing forces and ‘Thicket 018’ is no different, aligning natural/man-made and organic/geometric symmetries. Translating these ideas to a physical form is never a linear process, one often constrained by engineering, production and material costs. I sincerely thank Alcoa for their support of my work and patronage of the arts in Western Australia through their continued support of Sculpture by the Sea.”

The award is a significant increase in the support from Alcoa to artists in Sculpture by the Sea, Cottesloe who work in aluminum.

Alcoa of Australia Managing Director Michael Parker said, “We’re proud to be a founding and major sponsor of Sculpture by the Sea, Cottesloe since it first graced the Western Australian coastline in 2005. The exhibition has generated far-reaching community benefits for 15 years.

“We are delighted to support artists to use our flagship product – aluminium. Strong yet light and durable, aluminium is a perfect material for sculpture and this is a perfect exhibition to showcase our product.

“This year, at least eight artists chose to work predominately with aluminium with West Australian Miik Green, a worthy recipient of the inaugural $10,000 Alcoa Aluminium Sculpture Award. Miik is a passionate advocate for contemporary art in our State and his standout sculpture embodies the versatility and artistic possibilities of aluminium.”

David Handley AM, Founding Director of Sculpture by the Sea at Cottesloe and Bondi said: “It is a great honour for Sculpture by the Sea, Cottesloe to host this major new national award for a sculpture made in aluminium and tremendous to see an artist of the calibre of Miik Green as the first recipient. Being a sculptor is one of the hardest art forms in which to forge a career. Major awards, of which there are few, play an important part in increasing an artist’s public profile while putting much-needed funds in their pockets. Congratulations to Miik Green and thank you to Alcoa.”

Miik Green is a visual artist and researcher living and working in Perth. He is an associate editor for two international art journals, published author and a previous chair of Artsource, Western Australia’s peak visual arts body.

Green draws his inspiration from the microscopic aspects of nature and is currently involved in cross-disciplinary artistic collaborations that integrate the fields of science, mathematics, and physics. He is interested in equilibrium, opposing force and material resistance in arts practice.

As a recipient of an Australian Postgraduate Award Scholarship, Green was recently awarded a doctorate in arts practice through Curtin University of Technology. He has been invited to speak on arts practice at national and international conferences, most recently in Paris, Rome and Budapest.

‘Thicket 018’ will exhibit alongside over 70 sculptures from a broad range of Western Australia and interstate artists, as well as a large gathering of international artists from USA, Israel, China, Japan, South Korea, Sweden, Norway, Finland, Italy, Slovakia, Austria, Lithuania, Greece and Andorra.