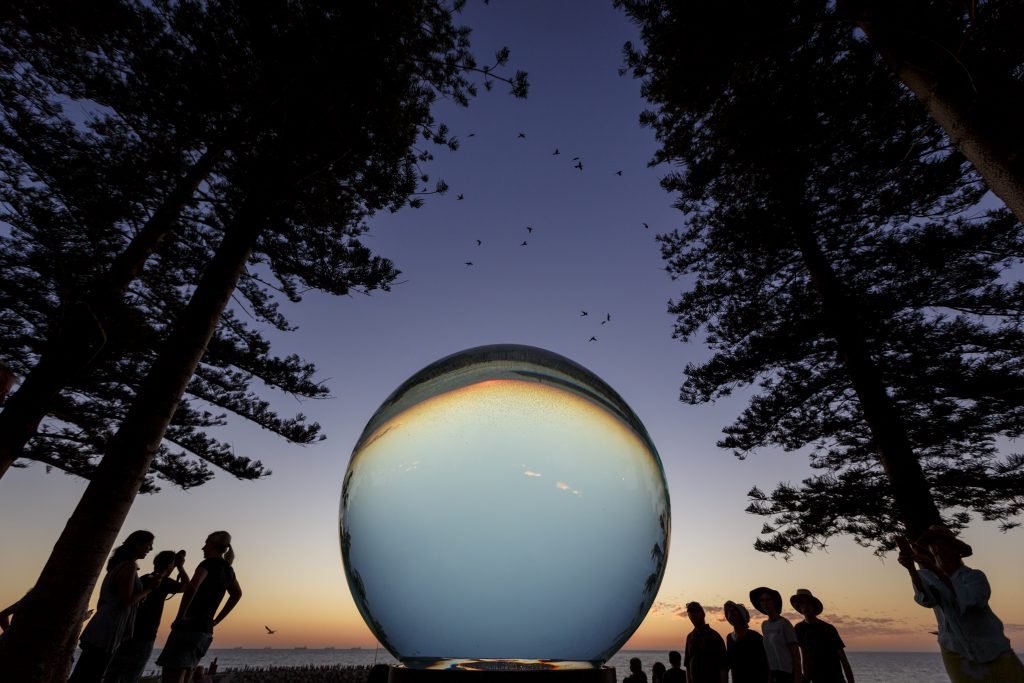 On 2 March, 2018 the 14th annual exhibition will open to the public and 73 artworks by 77 artist/collaborators will take their place on the white sand of Cottesloe beach, on the surrounding grass terraces populated with towering Norfolk Island pines and on the infamous groyne.  The exhibition is a spectacle for its setting against the backdrop of the Indian Ocean with its world-famous sunsets and the scope and range of Australian and international sculpture that identifies a cross-section of sculptural practice.  International artists exhibiting for the first time are Gjøde & Partnere Arkitekter, a prize-winning architecture studio based in Aarhus, Denmark and a celebrated Chinese artist who will shortly be announced; amongst the celebrated international artists returning to Cottesloe are Zadok Ben-David from Israel/England and Peter Lundberg from USA.

The Cottesloe exhibition has grown to be an established event on the national and international sculpture calendar. The inaugural Sculpture by the Sea on the west coast of Australia in 2005 presented 38 sculptures, with exhibitors predominantly from Western Australia and 7 from overseas – three from Japan, and one each from China, Italy, Iceland and Spain. There continues to be a strong contingent of Western Australian sculptors, with 28 sculptors selected from that state for the 2018 exhibition including leading senior sculptors Kevin Draper, Ron Gomboc, Stuart Green and Tony Jones OAM, alongside mid career sculptors Elaine Clocherty, Sharyn Egan, Janine McAullay Bott and Johannes Pannekoek who are establishing significant national reputations.  The striking difference over the past 14 years is the growing participation of international artists with 32 international artists exhibiting at Sculpture by the Sea, Cottesloe 2018 – twelve from Japan, three from China, two from Denmark, one from South Korea, as well as from India, Spain, Singapore, Sweden, England, Iran, Israel, Indonesia, Germany, USA, New Zealand, Thailand and Slovakia.

Since the inaugural 2005 exhibition 500 different sculptors have participated at Sculpture by the Sea, Cottesloe including some of the best and most famous sculptors of the world: Sir Anthony Caro OM, Tony Cragg and Zadok Ben-David from England; Keizo Ushio, Kozo Nishino from Japan; David Černỳ from the Czech Republic; Steinunn Thórarinsdóttir from Iceland; Jörg Plickat from Germany; Fletcher Benton, Peter Lundberg from the USA; Keld Moseholm from Denmark; and Chen Wenling, Li Wei, Sui Jianguo, Guan Wei and Wang Shugang from China.  Undoubtedly the exhibitors at Sculpture by the Sea, Cottesloe 2018 will also leave their mark on the memory of those who see their work.