On this day in 1997 the first Sculpture by the Sea exhibition was held on the 2km Bondi to Tamarama coastal walk. 64 artists exhibited their work including many leading sculptors Marguerite Derricourt, Richard Goodwin, Geoff Harvey, Stephen King, Michael Le Grand, Vince Vozzo and then emerging and now noted artists Sean Cordiero and Margarita Sampson. On a $400 marketing budget and with a staff of volunteers working out of a lounge room the show was staged and an estimated 25,000 people visited.

As we look forward to staging our 20th anniversary exhibition from 20 October – 6 November this year, here is an image of Margarita Sampson’s sculpture ‘Urchins’ from the 1997 exhibition.

“This was the first sculpture that I made. Before this I was a painter and felt somehow that painting was not expressing what I wanted. When I heard about Sculpture by the Sea it opened up a new form of expression for me”
Margarita Sampson 1997, member of the Sculpture by the Sea, Bondi Decade Club in 2015. 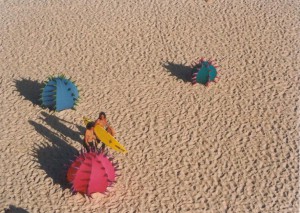