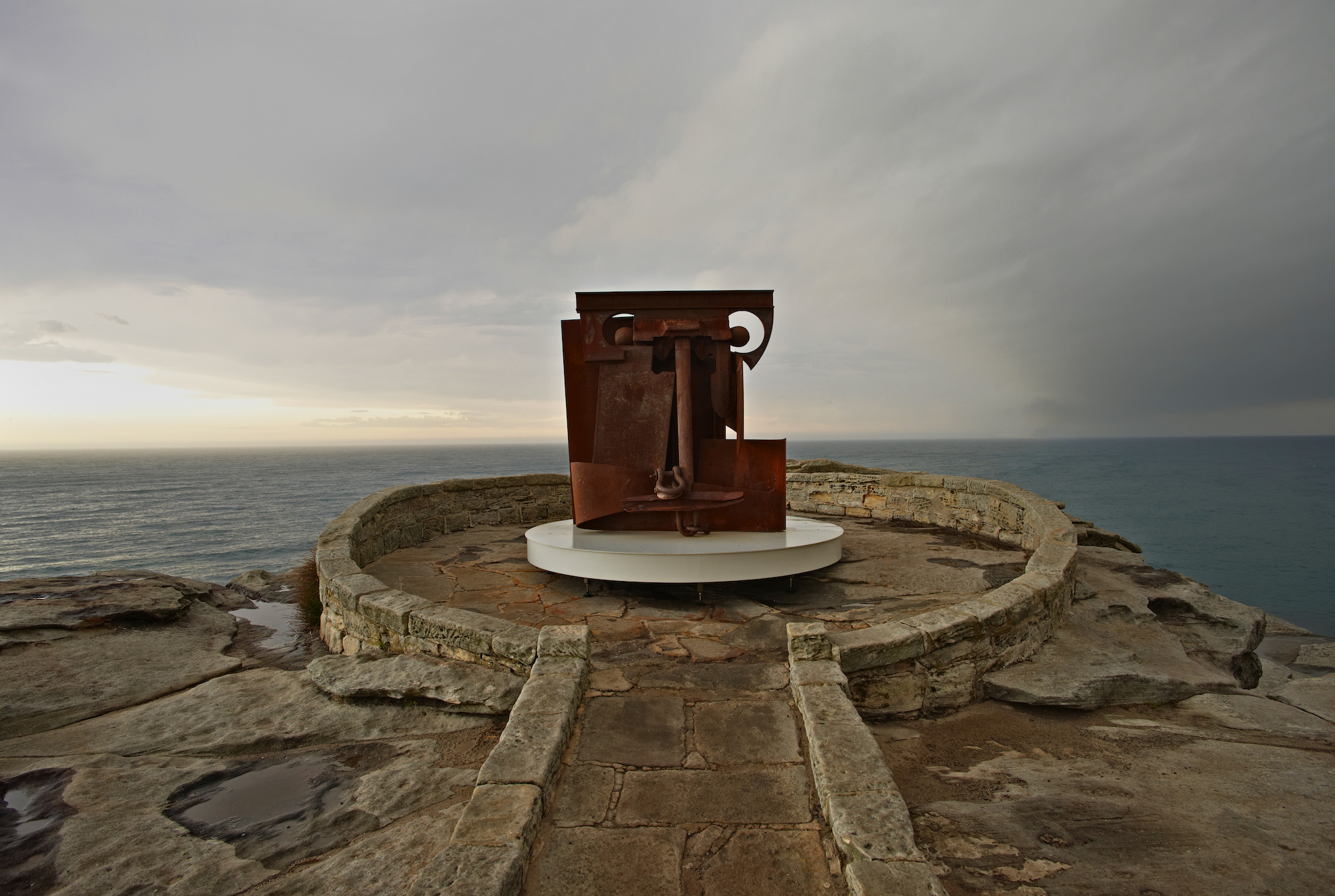 Anthony Caro is the finest sculptor since David Smith (d.1965) and among the major artists of the modern era. In the 1960s he was a focus for theoretical debates concerning the nature of abstraction and indeed art in general; Michael Fried, for example, believed Caro demonstrated the ongoing effectiveness of the formal language of modernity at a time when many were declaring that tradition to be exhausted. He has also directly influenced a legion of artists via his teaching at St Martin’s College of Art in London, which became under his guidance something of a mecca for sculptors. Perhaps most remarkable is the fact his work has not stagnated after fifty years – like Dylan, the ideas have kept coming.

Once he decided to work in metal assemblage, Caro began with a bang. Smith, an American, was the presiding master, having over two decades turned the nascent tradition of welded steel construction into a supple formal language, with its tensile strength, its toothpaste-like joinery, its flickering angle-ground surfaces, its industrial connotations, and its unadorned cement footings. Caro’s Midday (1960) de-natured the idiom. The construction was tipped over, the parts bolted together like machinery, and the whole coloured yellow, a brilliant reversal, like a truck playing ice-cream music. For the next ten years, Caro unpacked a playful repertoire of point, line, and plane. Next to Smith’s urgency, he had a distant, oriental sense of weight and balance. His work was non-figurative, but nevertheless allusive and musical. Titles played their part. Early One Morning (1962) encapsulates the bundle of physical sensations of waking up in bed. Some pieces were barely there at all (spare rather than minimalist, which means something else in the 1960s). Sleepwalk (1965) is no more than five slender lines of steel, stumbling along a path. Colour was used ever more daringly. A Month of May (1963) dances in green, yellow, and pink (!), still today retaining its capacity to unseat expectations regarding the idea of ornament in sculpture. This was modernism at its most sophisticated. Caro had achieved a level – expressive and vital – that any artist would envy. Yet eloquence can quickly become a manner, and in the early 1970s Caro cleared the decks and started again. The material was rendered uncomfortable, even ugly. Where before there was deft, if unexpected, placement, now there was collision and dissonance. Forms were squashed and space compressed. Gay colour turned to rust. Hosanna (1972) has the silhouette of a circular saw and the dull surface of metal left lying around outdoors. Skimmer Flat (1974) looks like something from a scrap-yard. Thereafter the work became evermore open-ended and complex, and increasingly engaged with the art of the past – although he does not use quotation so much as borrowed phrasing, often enough barely detectable. His mid-career masterpiece, Midnight Gap (1977), harnesses the ghost of Matisse (whom I would guess is his favourite artist) to an angular and difficult version of the paragone, where a serene picture plane appears to have been accosted by a noisy ring of three-dimensional sculpture. In such pieces, Caro revealed a wariness towards easy beauty, an enervating trait that has helped keep him sharp and as immune as anyone can be to stylisation.

‘This was modernism at its most sophisticated. Caro had achieved a level – expressive and vital – that any artist would envy.’

In Caro’s hands, material – usually steel (painted, rusted, or galvanised), but also bronze, wood, terracotta, paper, and plastic – oscillates between mere matter and articulate form, so that his work, whatever the individual title, embodies the formal possibilities of art. Some sculptures barely look like sculptures at all; in others the orchestration is more complete; and in some work, both conditions seem to be happening at once. Over the last twenty years, fragments have become increasingly important, evoking the disappeared or half-forgotten whole. Erl King (2009) has the casual quality of a stack of rusted junk. The components don’t have to do much before they form a head, and rely on wit, such as the I-beam forming a fringe and/or eyebrow. It is basic: the head might also be an accident of dissembled ship parts, for an anchor and propeller can also be seen. It feigns artlessness, as if to say that we can’t help but create idols. There’s more, however. The large steel plates are pieces of a shattered helmet, protecting the cheeks. Erl (Old Saxon = Man) King is an ancient warrior! The archaic calls forth other sounds, such as Henry Moore’s bronze heads, Picasso’s ironic primitivism of the 1920s, then further back to the shards of history. Maybe.

The Russian sculptor Naum Gabo hoped that art criticism might move beyond its need for the word ‘abstract’. Caro’s work is abstract. Big deal. It is also by turns clamorous, sweet, muscular, squashed, strained, playful, ironic, and nostalgic, all adjectives that suggest one’s experience of the world and knowledge of art. It is a speaking language of form, and therefore figurative in its own way.