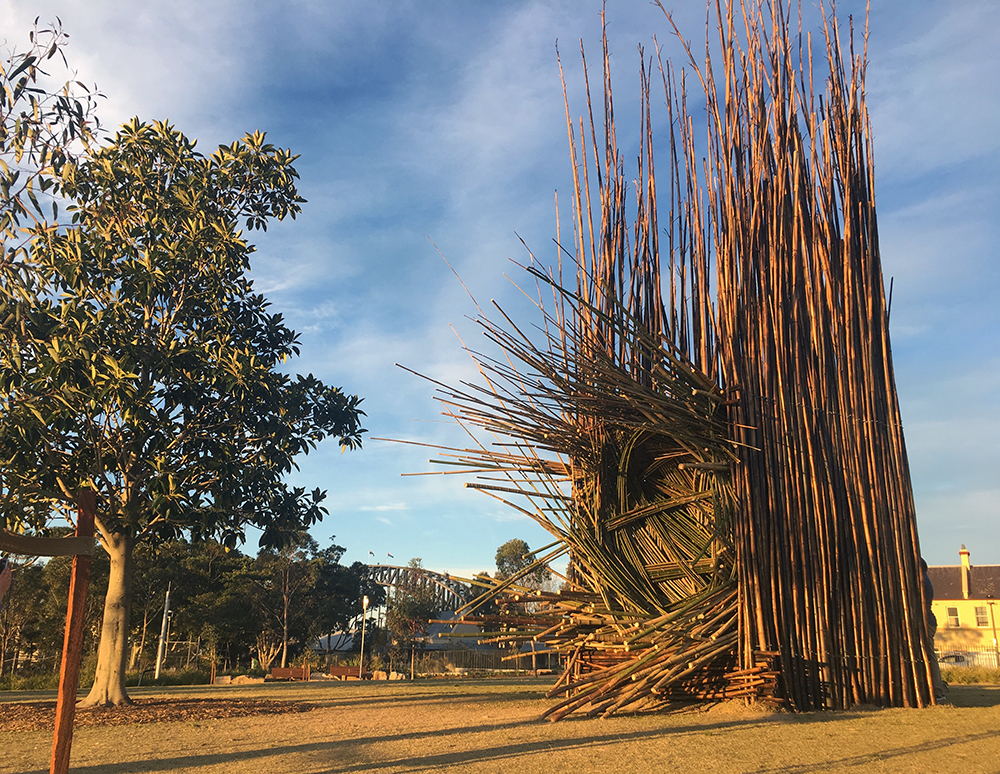 Bower is a smudge on the horizon, a hatch traced in the air with charcoal. Inside, an intimate place to observe and be embedded in the natural landscape of Barangaroo. The feminine qualities of the nest acknowledge Bennelong’s wife (the name sake of the cove).

Using giant grass, the artwork creates a temporary cave for observation and reflection; an opportunity to inhabit the view. It invites the passer-by to climb in and settle. The contrast between the charred outside and the fresh inside tie with a primordial landscape. It recalls a time before the fire, the same way the burnt log recalls a tree. The untouched interior is a place of comfort, a seed pod.

Cave Urban is an international arts collective formed in 2010 to investigate vernacular lightweight structures and their relevance to contemporary design. What began as a means for research has developed into a practice that explores the intersection between art and architecture through the use of bamboo.

Cave Urban first came to the public’s attention at the 2012 Sculpture by the Sea. Their work Mengenang was awarded the People’s Choice at both the Sydney and Cottesloe exhibitions. Since then Cave Urban has created many large-scale bamboo art installations and collaborated with a number of international artists around the world. 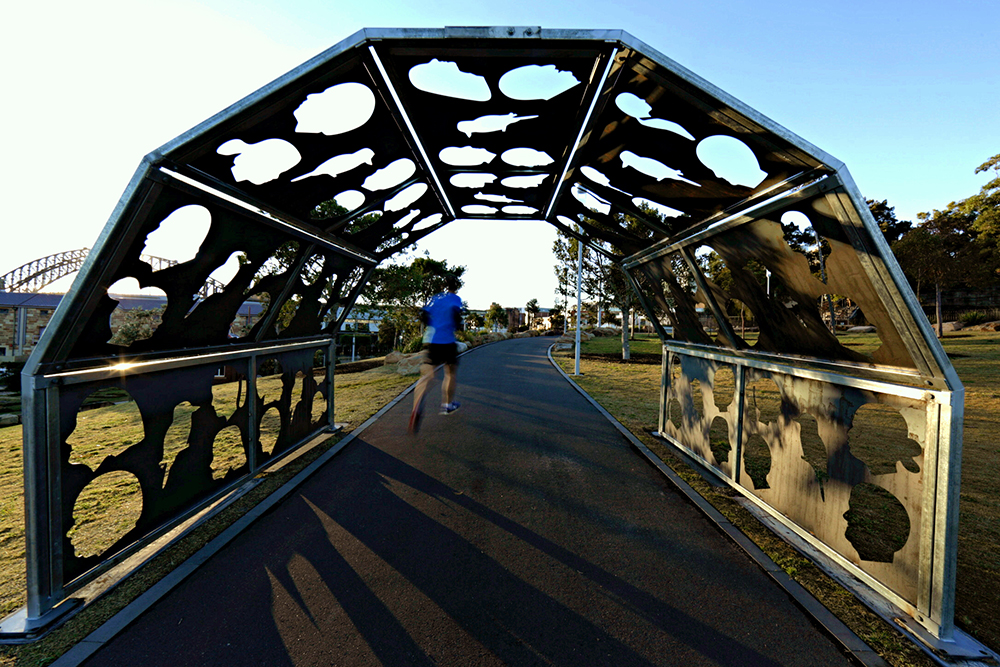 The story behind this, is to get the Darug people all in the same place at once, as it is hard to all meet at the same time as we all live all over Australia. I live in NSW, my Dad lives in Queensland and some have gone to a better place. RIP. We have babies to elders and also the late Chris Bourke’s face is on the project.

The faces are true faces of people from teachers, mums, dads or a person who might walk past you on the streets. It could be your neighbour or doctor. It could be a foster care parent or maybe a little baby learning to walk.  But most of all it is the Darug person being strong and deadly.  It’ like having the tribe meeting all together without really being there. When you walk through the tunnel you are surrounded by the tribe and feel the presence of the Darug clan.

I didn’t want to just do a square box to walk through as this would have been boring. I needed a shape which would stand out and look more like a cave or shape which the Aboriginal people would have lived in.

The biggest challenge was getting the side photos of the faces, as people are used to looking straight at a camera.  I got part of people’s faces and other items, which was very funny.

Based in Dubbo, New South Wales, Adam King is a member of Sydney’s Boomalli Aboriginal Artists Co-operative. His early technical training was in construction and engineering where he acquired the drafting, boiler-making and similar skills that he deploys as a sculptor.

King readily acknowledges the complementary and important education in art and local culture that he gained from aboriginal elders. A lifelong member of the Darug Tribal Aboriginal Corporation, King is actively involved in different capacities with a number of aboriginal communities and organizations. He is also a foster parent to aboriginal children. 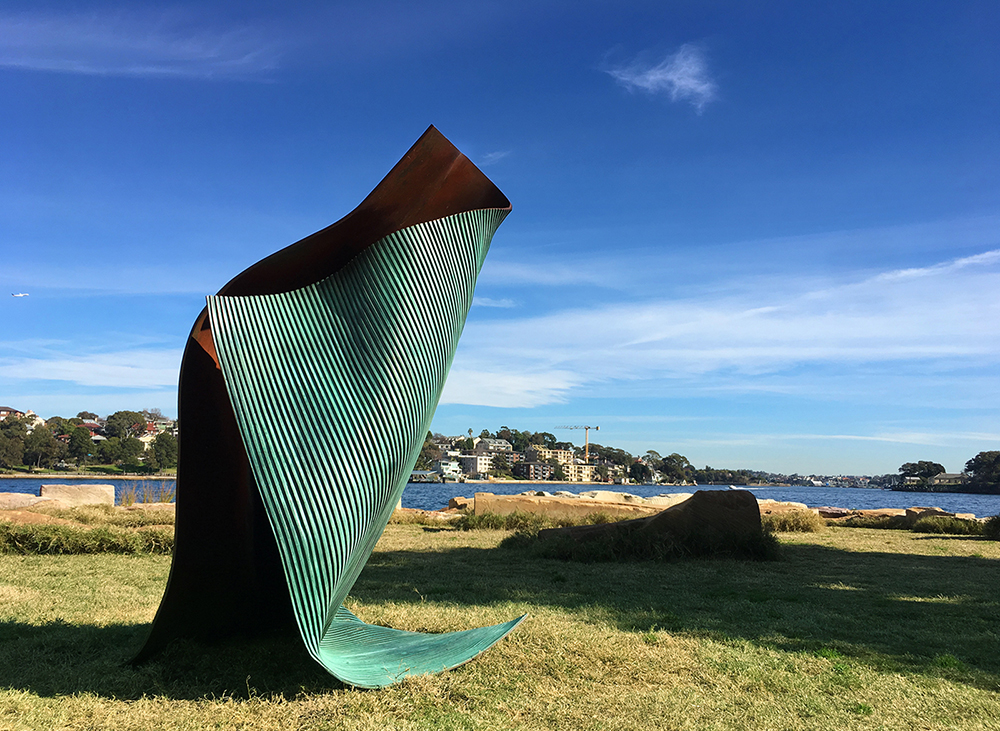 Bronze is a demanding material but skillful manipulation allows the artist to cast seemingly fluid, delicate and even floating shapes as we see in Rogers’ Weightless series of sculptures to which this work belongs.

These bronze forms evoke  a sense of weightlessness and require meticulous finish and patination (colouring the surface by means of chemical process).

The Weightless sculptures are metaphors for the central questions of organic life: growth, propagation, evolution, emotion and rhythm. Rogers’ flowing organic forms contradict our notion of bronze as a heavy, intractable metal.

Both Rogers’ land art project and his cast bronze sculptures are the subject of several publications as well as film documentaries shown on Ovation in the USA, the Discovery channel in Europe and the ABC and National Geographic channels.

He has received numerous public commissions and is represented in private and public collections here and abroad. Rogers’ series of bronze and stainless steel sculptures titled We Are is currently on view in Venice as a collateral exhibition to the 57th Venice Biennale. A new 10.5m high sculpture, titled I Am – the largest in this series – was recently installed in Kazakhstan. 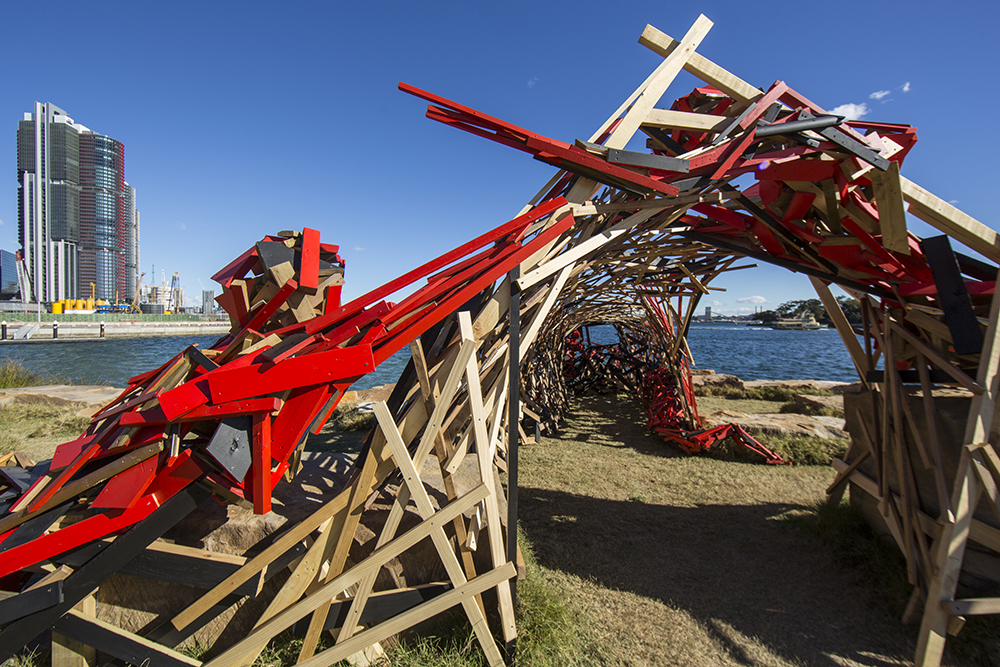 Mental Convolution is a site-specific installation that explores abstract notions to create a physical manifestation and an emotional imperative of a given mindscape: a labyrinth of the mind. Expressive sculptural figures crystallise and dissolve into the installation, immersed in everchanging thoughts. They physically articulate the emotions generated from the mind. Doorways and window frames portrayed are metaphoric for pathways and positive possibilities. The installation, constructed from an assortment of timber in an interconnected mass, is both visually chaotic and structurally interwoven: organic yet fixed. Invited to enter, the audience will explore a frozen moment of endless thought, and weave their way through the space.

Elyssa Sykes-Smith explores the figure through sculptural installations. She completed a BFA (Hons) at the National Art School, Sydney in 2013. Her work has been selected for Sculpture by the Sea exhibitions at Bondi from 2012 to 2016 and at Cottesloe from 2015 to 2017. Awarded a Clitheroe Foundation Mentorship in 2012 and First Prize at Sculpture at Scenic World in 2015, Sykes-Smith has permanent installations at Saatchi & Saatchi, Sydney and the Shoalhaven Entertainment Centre. 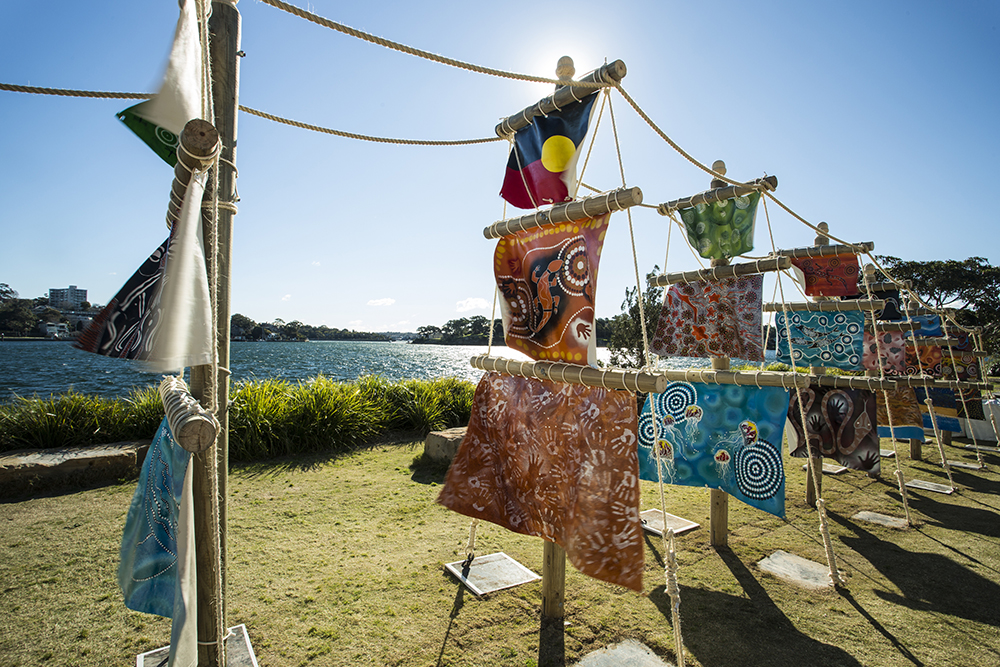 The title refers to the eleven ships of the First Fleet that arrived at Botany Bay on 24 January 1788, founding the penal colony that was the first European settlement in Australia. This installation of eleven ‘masts’ each rigged with three ‘sails’ represents not simply the British vessels themselves, but more significantly recognition of the rich cultural traditions that existed here for 60,000 years prior to the Fleet’s arrival.

11 Ships testifies to the impact of the First Fleet on  these ancient cultures and people. The sails are painted with culturally significant symbols, totems or spiritual emblems by individuals from tribes across Australia, in collaboration with the artist who acknowledges the Free Spirit Aboriginal Art Gallery and community in Mayfield, Newcastle.

As well as her practice as a visual artist and member of the Yuin Nation, Tereasa Trevor works professionally in corporate communication, community engagement, marketing and freelance writing. For this project, she was based at the Free Spirit Aboriginal Art Gallery and Community in Mayfield, Newcastle.

Tereasa Trevor acknowledges the following artists who collaborated with her in painting sails for 11 Ships with motifs that have significance for their respective tribes as identified below.

Also participating were members of the Justiz community, and Osheana Hokafonu, a Tongan community worker who painted together with Mikayala, a young aboriginal girl on her journey of discovery. 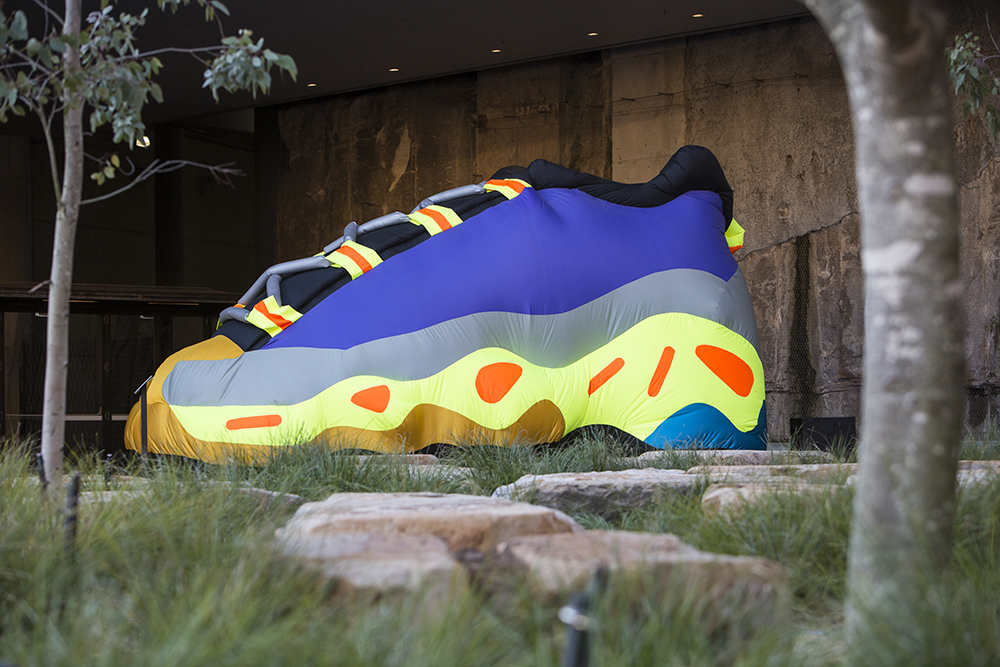 My work exposes the plastic nature of contemporary  life and the increasing malleability of our identities. It is a catalyst for reflection and deliberation during  a period when our conviction that humans are unique  is challenged on multiple fronts; from our persistent consumption of generic, mass-produced products through to increasing interest in genetic engineering, artificial life technologies and body modifications, both in the physical and virtual realms.

By referencing cultural icons I try to replicate, illuminate or rupture the underlying agendas of popular culture and advertising, and to highlight the difficulty in deciphering the authentic from the adapted, artificial or virtual.

Christopher Langton was born in Johannesburg, South Africa  in 1954 and arrived in Australia in 1973. He graduated from the Victorian College of the Arts, Melbourne in 1992.

Langton has been the recipient of several awards including the 2013 McClelland Achievement Prize, a 2001 Australia Council Studio Residency(New York) and Arts Victoria Project Grants.

Based in Melbourne, he is represented there by Tolarno Galleries. 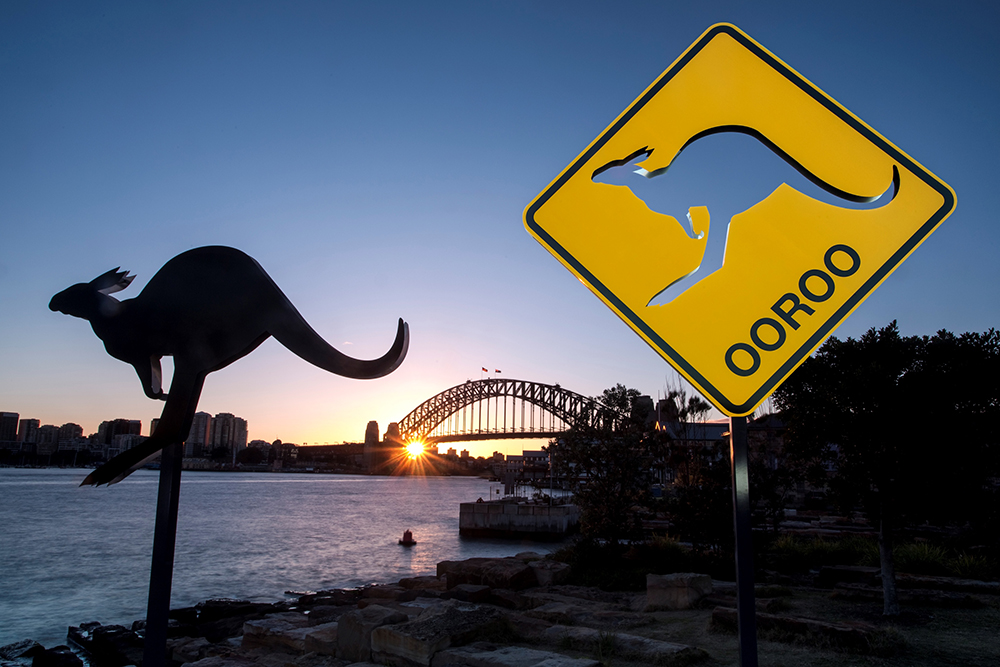 Kangooroo brings together road sign language and Australian vernacular speech with a poetic intensity, combining Captain Cook’s original spelling of Kangooroo (from the Guugu Yimithirr word gangurru) with the ‘see you later’ idiom of ‘Hooroo’ or ‘Ooroo’. The kangaroo motif is precisely modeled on Australia’s famous copper penny.

Kangaroo Crossing road signs are an Australian icon: a favourite with souvenir hunters and, sometimes, a target for hunters with guns. No wonder the ‘roo is making its escape. The ‘roo’ of ‘ooroo’ is contained within a palindrome, but kangaroos are one of the few animals which cannot walk backwards.

Richard Kelly Tipping is internationally recognised for using official signage templates to make poetic shifts in meaning. As a word sculptor and visual poet he is extensively represented in the National Gallery of Australia and the Art Gallery of NSW, among many public collections. His public art projects include the Watermark steel sculpture (‘flood’) on the Brisbane River; the ‘art fence’ Swerve at the Adelaide Showgrounds made of cast-aluminium pickets and over 100 metres long; and Kangooroo for Barangaroo Reserve.

Originally from Adelaide, Tipping lives and works in both Sydney and Newcastle. He is represented by Australian Galleries. His website is: www.richardtipping.com 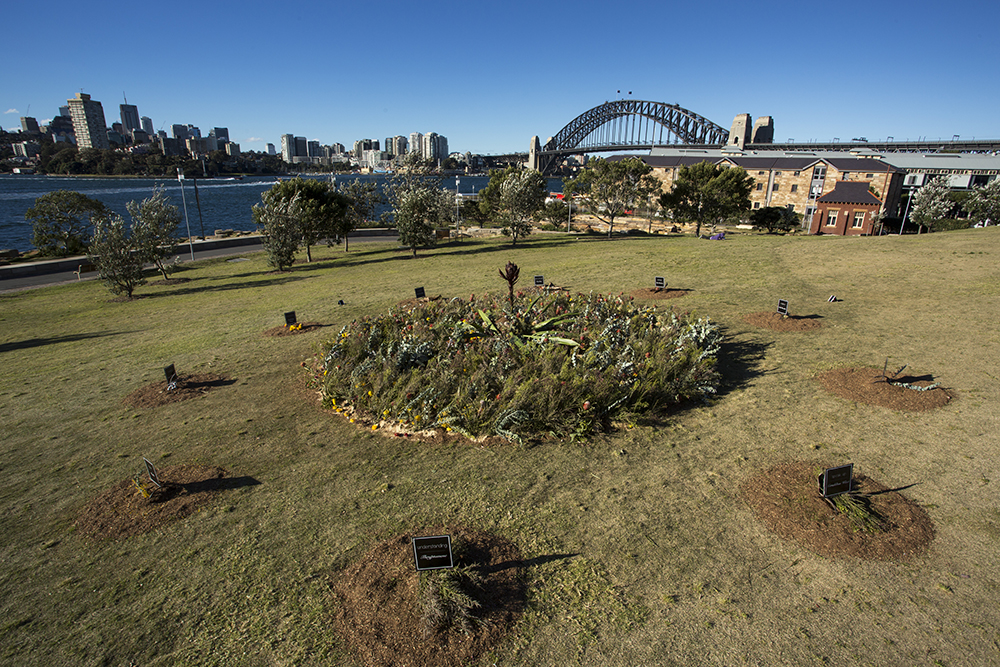 For over 60,000 years, Aboriginal people have been the continuing custodians of this land now known as Australia, living successfully with its rising and falling sea levels and mega fauna. For all this time, the land provided everything required by its inhabitants, a fact that cannot be disputed. Yet, to justify colonization, Australia was proclaimed terra nullius (nobody’s land). The artist contests this misconception by rewriting history, the true history as terra omnia, the land of everything.

Born in 1981 in Subiaco, Western Australia, Nicole Monks is a trans-disciplinary artist of Yamatji Wajarri, Dutch and English heritage. Based near Redfern, Monks’ work is an expression of her cross-cultural identity and takes storytelling as a means to connect the past with the present and future. 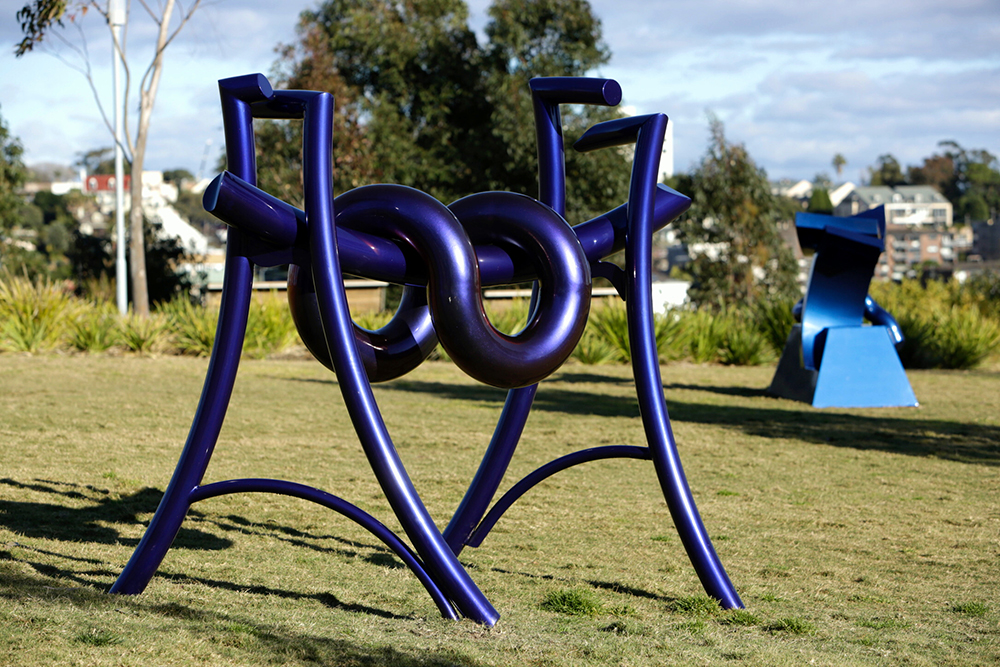 It became apparent while making the sculpture that  it was referencing visual experiences from previous travel to Japan, most notably bamboo structures and the way they had been cut and “A” frame structures used for drying sheaths of rice after harvest. 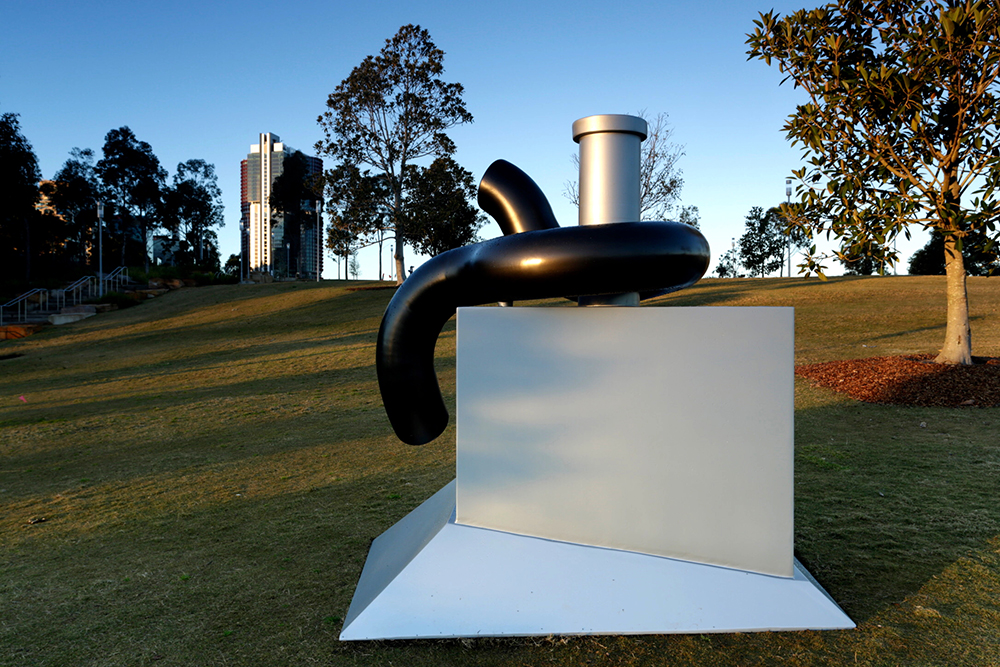 This sculpture explores the plinth/pedestal as an active component of the overall work contributing to the principal image of the sculpture. It is used also as a contrasting element to the more fluid and nautical reference of the bent and vertical pipe elements. 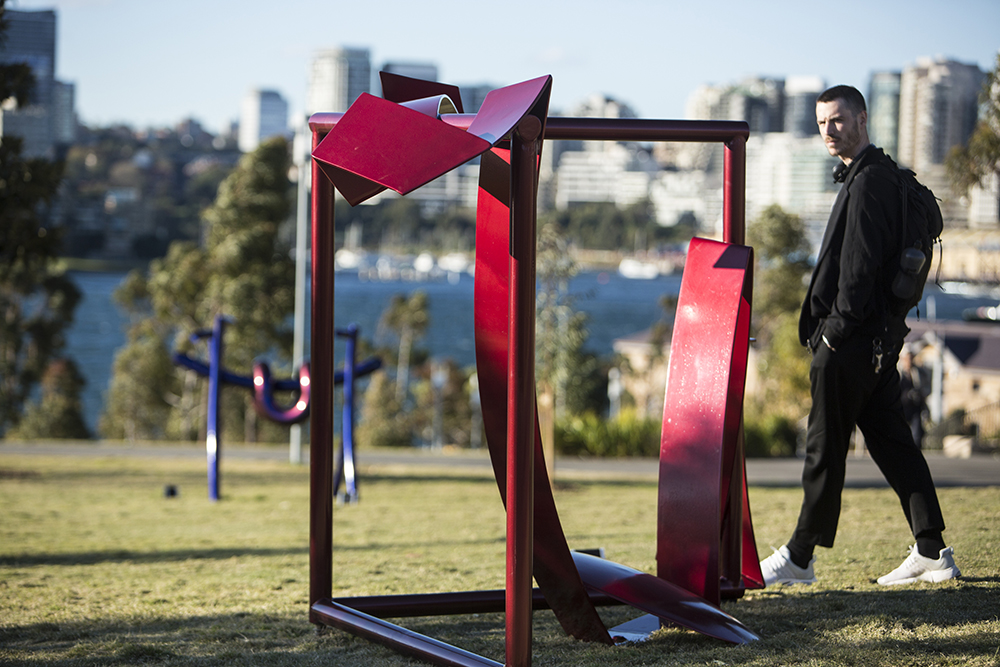 This work explores the relationship between the frame as a pictorial device contrasted with a multiplicity of views generated by the rolled ribbon of steel plate cascading and interacting with the rigidity of the pipe frame. 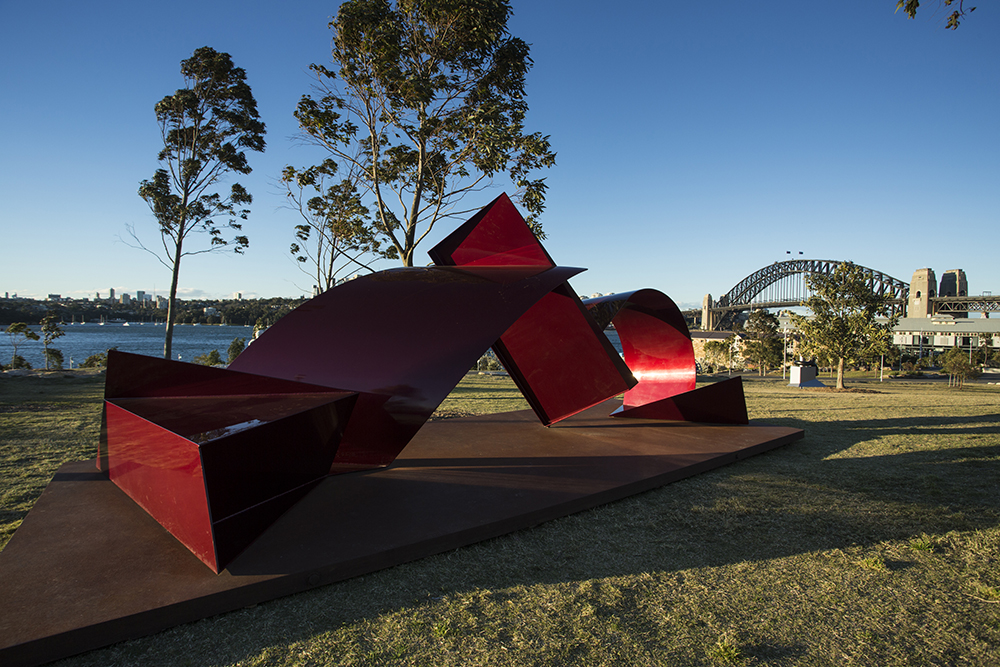 This sculpture revisits an earlier investigation of the use of large rolled plates to create an image of casualness and lightness in contrast to the weight of the steel. The vertical element is supported by the buttress-like rolled form on either side of it. 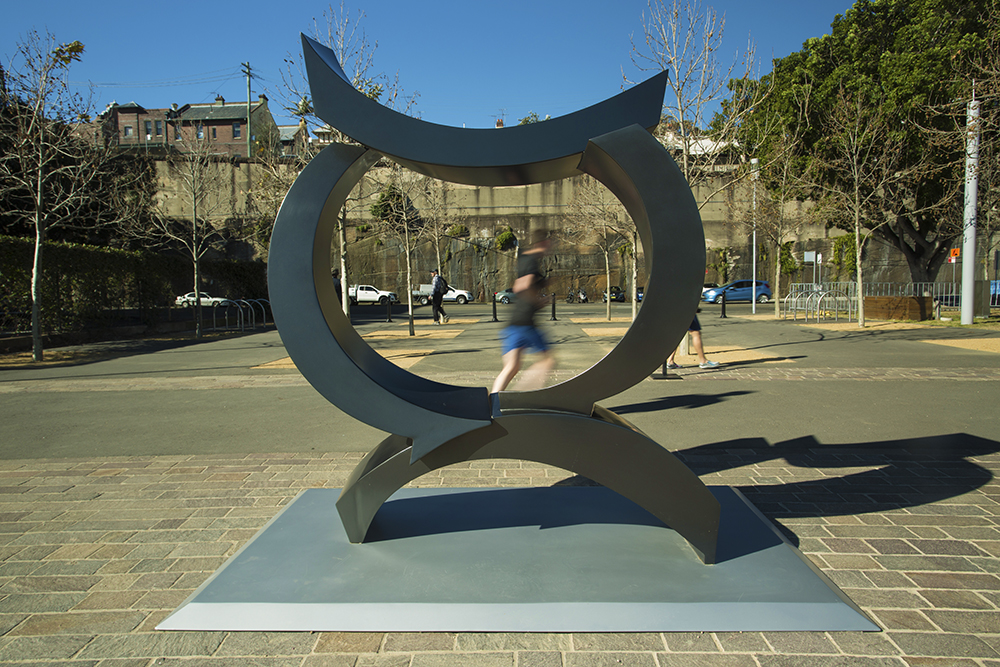 In the South Australian Museum‘s Polynesian room I chanced upon three small, carved wooden headrests. These informed the beginnings of this sculpture that also contains references to the Japanese Torii (gate). 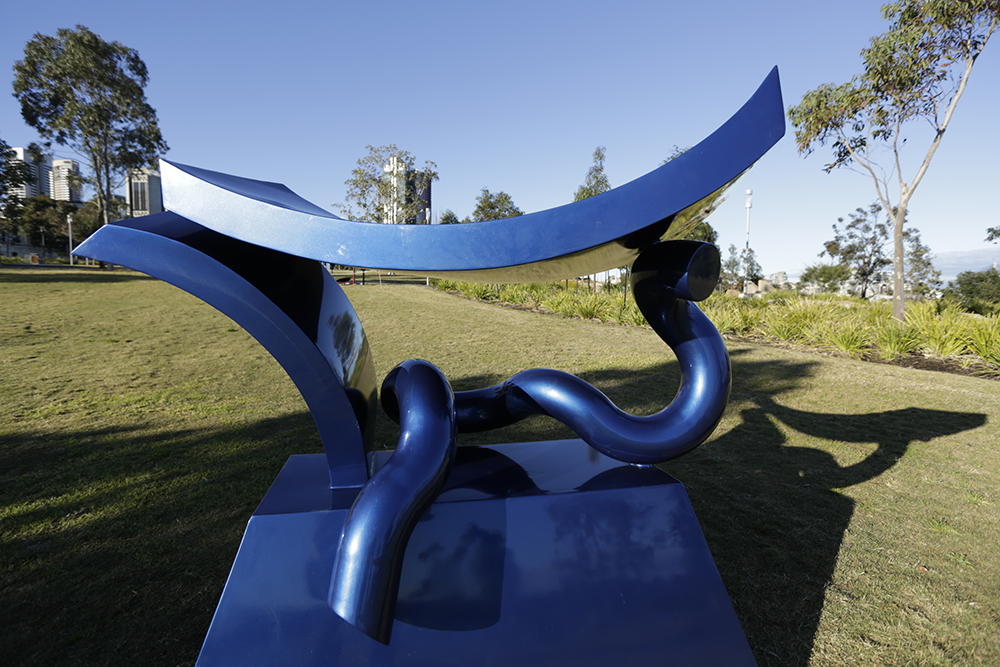 Developed from a much smaller table sculpture that challenged the incorporation  of a pedestal-like element as integral to the whole. This element is contrasted against the box fabricated elements that have their reference in the Japanese Torii (gate) and serpent-like pipe that sits between them.

Michael Le Grand has worked in steel since graduating from the Victorian College of the Arts in 1974 and further studies at Saint Martin’s School of Art, London. In 1978, he was awarded an Australian National University Creative Arts Fellowship.

The recipient of numerous Australia Council and other grants and fellowships, he was co-winner of the Inaugural Sydney Water Sculpture Prize at Sculpture by the Sea, Bondi.

A participant in residencies and sculpture symposiums in Canada, USA, UK, Germany and Japan, Le Grand’s work has featured in solo and group exhibitions here and overseas.