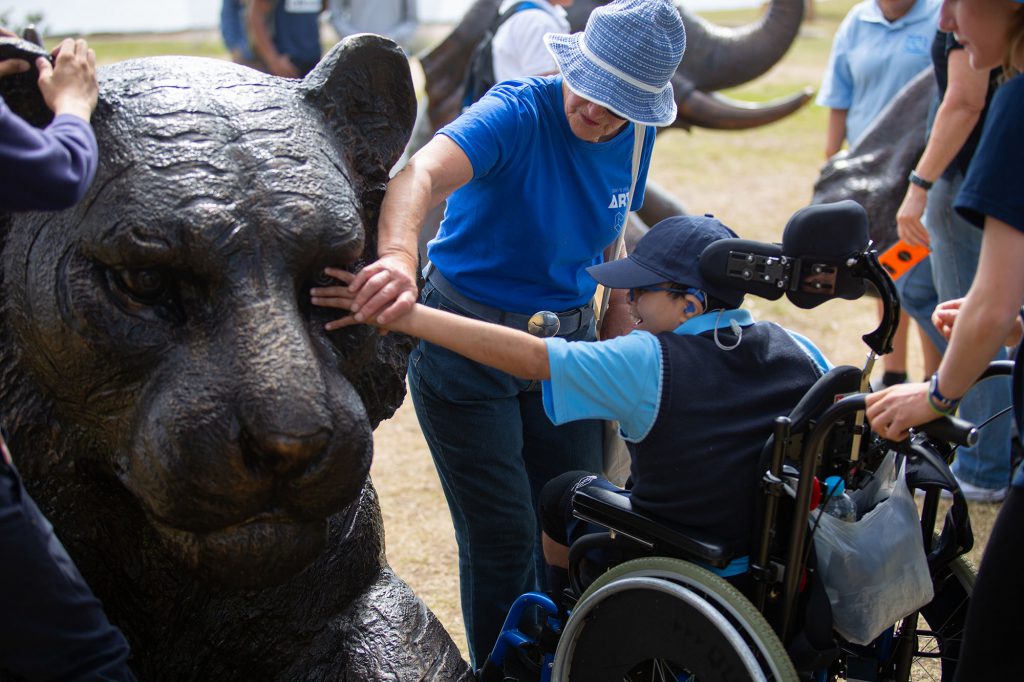 Sculpture by the Sea places the wishes and needs of people with disability at the forefront of our thinking and planning.

We are fully supportive of making the Bondi coastal walk into an accessible Bondi coastal path. Had the currently being built access path not taken us by complete surprise in mid-May this year we would have sought to work closely with Waverley Council to encourage them to create an access path that provides meaningful access to a large section of the existing Bondi coastal walk right around the south Bondi headland to the north Tamarama headland.

Below is the design of the alternate access path that has the further benefit of not reducing open green space or an impact on the artists in Sculpture by the Sea. 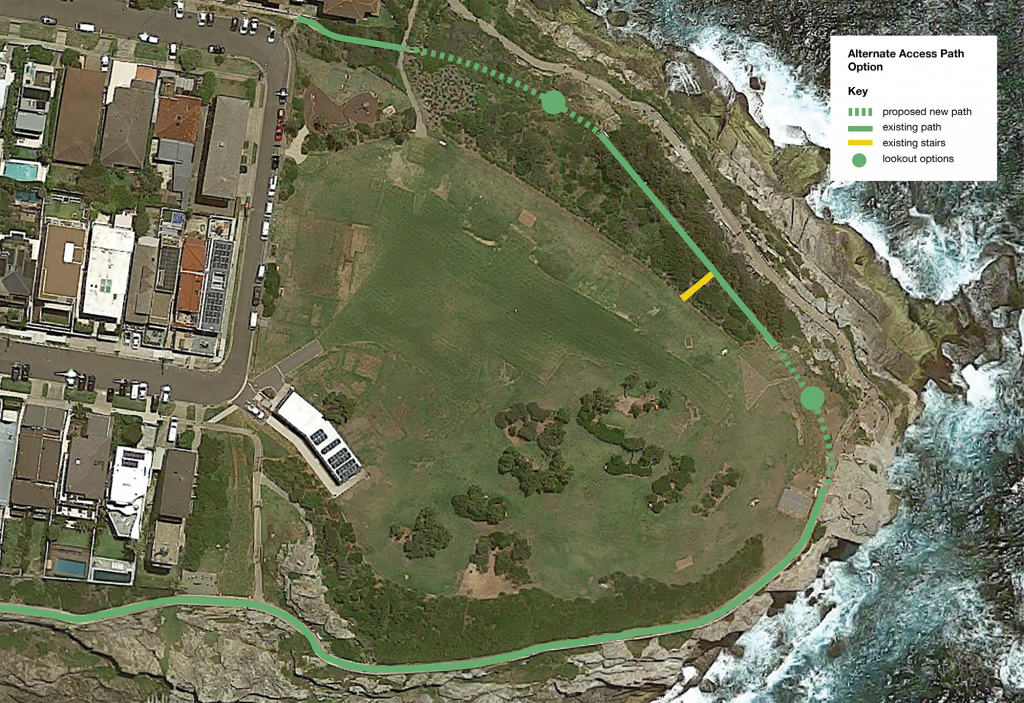 We have informally raised this path with Council over at least 12 years and urged the Mayor on 28 May this year, and all of the other Councillors since, to seek funding from the NSW government for this alternate path or better still to fund an access path from Bondi beach to north Tamarama as identified by Justin Reid and Adam Long in their short film Bondi Rollercoaster. Please view film here.

In 2009, Justin and Adam contacted us with their plans to say they wanted to work with us to make their ideas for an accessible Bondi coastal path compatible with Sculpture by the Sea. We supported their ambitious plans and said we would be pleased to work with them if it was possible to secure the funding. In 2013, Waverley Council worked with Justin and Adam to create concept design, engineering drawings and costings done. In early June, Justin and Adam wrote to Council to ask them to build the access path that Council endorsed in 2009. Their letter also notes their safety concerns with the current design of the access path being built, which fully accords with the risks identified by two of Australia’s leading risk management consultants that highlight the risk of building an access path on a narrow ridge next to steep fall zones that are exposed to gusty strong winds.

Just like the exhibition itself, which began with a team of volunteers working out of a lounge room starting with $100 to run a one day exhibition in 1997, our Access & Inclusion program had humble beginnings, starting 10 years ago with a tactile tour for four people. Founding director David Handley tried to start tactile tours in the first years of the exhibition in memory of his grandfather who went blind from diabetes a number of years before. In these early years of the exhibition, as Sculpture by the Sea was not as widely known, the program was difficult to get off the ground. Happily, organisations did respond favourably 10 years ago when had the proper resources to consider this important community project again.

As the exhibition has grown so has our Access & Inclusion Program, which was created for individuals as well as special needs schools and organisations that provide services to people with disability who greatly enjoy our free tours. Last year, these tours were provided for over 500 people and their carers. Thanks to an increase in funding we sought from the Premier Gladys Berejiklian in 2017, we began an outreach program during the year taking artists into, among other places, the Wairoa School to conduct artist led sculpture making workshops.

Please find here a link to our Access & Inclusion Program report from 2018.

We would welcome any suggestions from the community regarding our Access & Inclusion program as well as the opportunity to discuss how we can better serve the needs of people with disability as well as possible avenues to increase funding for these initiatives.  For our part, we have been seeking a corporate sponsor and/or a Patron for the Access & Inclusion Program to build the funds available to expand the number of free private tours we offer during each exhibition and in particular to grow and develop our outreach program during the year.

Returning to the current situation, unfortunately, we had no consultation with Waverley Council since the one meeting in April 2017 when we explained the problems the path would cause for the exhibition and we were told they would get back to us to discuss their plans. We heard nothing further until we were told on 9 May this year that the path was being built and we first viewed plans for the path on 17 May. This was after all of the artists had been selected for this year’s exhibition and had started spending the $2 million dollars they collectively spend making and freighting their sculptures.

Importantly, we proposed a compromise to Waverley Council several weeks ago that would have seen the entire access path being built but avoiding the dangerous parts of the ridgeline. We proposed this compromise even though it would greatly diminish the exhibition site because it would not have ruined the best sites for sculptures in the world. The artists are inspired by the site as it is. If the artists are not inspired to spend an average of $25,000 of their own money to create works to exhibit on these prime sites, the show will dwindle into mediocrity and will fail to attract sponsors.

Over 180 artists from 24 countries around the world have since written letters attesting to the devastating consequences for the exhibition and calling for Waverley Council to reassess and find a solution that provides a safer accessibility path that would also not impact the sculpture sites that make the exhibition world-renowned and allow Sculpture by the Sea to deliver demonstrable and significant cultural, artistic, tourism and economic benefits to the local community.

One artist in particular, Eileen Slarke, who is now in a wheelchair, wrote to Waverley Council, “A terrible, impossible, unworkable idea. Do not let this happen!”

Last week we approached the NSW Government to enquire if the recently announced funding to protect open green space and to build more walking tracks could be utilised and adapted to make large parts of the Bondi coastal walk accessible as per our alternate access path or the plans of Justin Reid and Adam Long. They are considering this.

We are terribly torn by this situation. With our limited resources we believe we have been at the forefront of making major cultural events accessible and we wish to continue to do so.